I’ve never been one to make resolutions at this time of year but, ever since I jumped feet first into the corporate world about 22 months ago, I’ve done precious little writing.  So I hereby resolve to be a contributor to this blog on a nearly regular basis from here on out (I know this is just an informal resolution but the proper paperwork has been submitted to the appropriate office and is awaiting approval).  The main method by which I’ll be keeping my promise is by keeping a journal of sorts of the movies I watch, be they theatrical or home viewings.  As our good friend Ryan Gallagher pointed out on Twitter (@ryangallagher), everyone else in the world is doing the same thing so my hope is that my asinine opinions will get drowned out in the mix.

I’m currently in my yearly process of watching all the important things I didn’t get around to in the past year because I was too busy enjoying “How I Met Your Mother,” so these first four days of 2011 are pretty packed.  Or packed, at least, for someone who is not a professional film critic and has a day job and a girlfriend and belongs to a gym (?) and has a margarita habit that’s in first position, priority-wise.  This is all in preparation for the best-of Tyler and I will do on the show toward the end of February.

So here’s what you can expect: an update, at irregular intervals, consisting of my brief opinions on the films I’ve seen since the last update.  This being the first such update, I’ll use the 1st of the month as the starting point. 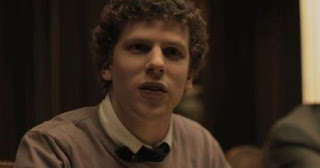 I’d missed this in the theater (due only partly to my tendency to strictly avoid movies that people keep telling me I have to see) and I had pretty much resigned myself to catching it on Bluray in the next couple weeks.  So imagine my surprise when, on New Year’s Day, I noticed that it was screening at the Sunset 5, which is a Laemmle theater.  For those reading in other parts of the world, the Laemmle chain provides the kind of theaters where well-to-do liberals go to see self-congratulatory documentaries about environmentalism and films that have poster-board blowups of Manohla Dargis’ glowing review outside the theater.

Of course, I’d heard great things about The Social Network and I’ve always been strongly attracted to Aaron Sorkin’s brand of verbal peacocking.  And the movie was directed by David Fincher, which was intriguing given that while he’d made some films I find to be pretty terrible (The Game, Fight Club, Panic Room), he also made one of the greatest American films of the past decade (Zodiac).  So I was interested.

The Social Network is a fantastic thriller about intrigue on the cutting edge of the business world.  It manages to make the writing of code breathlessly compelling because Fincher and Sorkin both are moving the film so quickly that you’re left with little time to even attempt to understand the technical goings-on.  You’re left with simply the gist of what’s going on in the creation of Facebook the website and only a little more than that in the creation of Facebook the company, which is fine, of course, because that’s not what the movie is about.

The movie is about the rise of a new kind of person, the person who exists alongside his technology, who inhales and exhales along with the avatars he’s created.  Mark Zuckerberg and the hundreds of millions who use the tools he created to socialize have spent so much time crafting the virtual versions of themselves that they are all that’s left in their own field of vision.  And this has become not only acceptable but a perfectly practical way of getting along in the world.  There has been and will be much discussion about whether these changes in social behavior are good or bad but Sorkin, for one, seems to have made his mind up about it and he doesn’t approve.

The questions the film is interested in are whether Mark Zuckerberg is a good person or not and whether he is who he is because of Facebook or if Facebook is what it is because of him.  He doesn’t care about profit – usually a signifier of good in American films – but it’s because he traffics in a different kind of currency, one that is less tangible than money but far more human.

Sorkin has chosen to be more nuanced than that (as opposed to his other mode, really really not nuanced).  He suggests that the retreat into the virtual world has made Zuckerberg and his generation neither good nor bad but something approaching amoral.  This is an arena in which David Fincher, with his cold palette and precise camera movement, is quite comfortable.

Given how much of the film rests on Fincher’s distancing methods and Sorkin’s towers of syntax, it’s surprising and refreshing that the best sequence in the film is a rush of physicality, sweat, close-ups and sweeping music.  The regatta scene is nearly blindsiding because we’re suddenly seeing people actually doing things with their hands, and feeling them with their bodies and really, truly, visibly caring about them.

Perhaps this is what The Social Network is trying to tell us.  That life is lived and experience gained by physical experience and not through the window of a screen with its deadening glow.  That’s old-fashioned, purist bullshit, of course, but it is remarkable that the film can make such a stodgy point while using the tools and aesthetics, the cadence and the lexicon, of the contemporary young world. 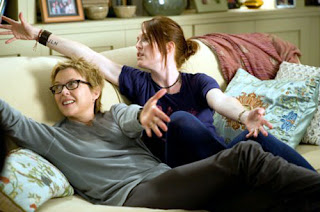 The Kids Are All Right

Lisa Cholodenko, in films such as High Art and Laurel Canyon, has long been a sharp observer and chronicler of the psychic life of the liberal, artsy fringe.  She’s delighted in settling into that battlefield in the outsider mind where their version of normalcy meets the understanding that they are not the norm.

The story concerns the introduction of the sperm donor, and therefore the biological “father,” of the family’s two children into the family unit.  When he enters the picture, he sees that the conventional things he rejected long ago, either consciously or subconsciously, are actually desirable and, what’s more, within the scope of his ability.  It’s in this middle, happy section of the film that Cholodenko reveals herself to understand not only the landscape of the mind but the abilities of the camera and the editing bay.  These naturalistic scenes capture the life-affirming minutiae of this world.  You can practically detect the aroma of flowers or the wind in the hair of a motorcycle passenger.

This isn’t a happy-ending type of film, as you can problem guess based on the critics who have adored it, and this section of the story must end.  The carefree exuberance, the feeling that a new life is beginning with endless possibilities, is revealed to be nothing more than a vacation, a summer at the beach.  It is time for school to start again, for the daughter to go to college, time for the real family to close ranks again and get back to the business of being a team.

The donor has to learn that he was never more than that.  Despite his biological ties to these children, a real family is forged in shared experience over a long time, strengthened by the survival of hardship and fiercely protective of itself.  It is still within the scope of his ability to have a family, just not this one.  He’ll have to earn his as they earned theirs. 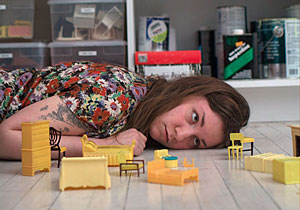 Where The Kids Are All Right made the latte liberals relatable, Tiny Furniture displays no inclination to do so at all.  Lena Dunham drops you into the world that is hers because she knows no other and seemingly doesn’t care to.

Dunham displays an affinity for blocking, framing and (oh, Christ) mise-en-scene.  And she is a sure hand in writing and directing (and performing) understated comedy.

Perhaps the funniest line in the movie is when, during an argument with her mother that she feels passionately about but we, like the mother, are befuddled by, Dunham’s Aura insists, “I’m having a really, really hard time.”  It is at least to the filmmaker’s credit that she understands that, while this character no doubt is having a hard time with her petty and wholly common post-college tribulations, she is rich, white and talented and she’s going to be just fine. 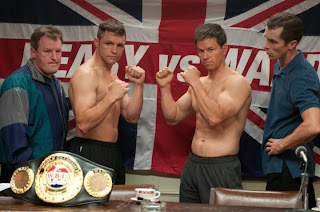 David O. Russell has never been comfortable simply telling a straightforward story but here he makes his most earnest effort yet.  This experiment in conventionalism is mostly successful but occasionally lazy, as if Russell couldn’t bring himself to condescend to telling a story he thinks we’ve seen before.

A shame, really, because everyone else is absolutely giving their all here.  Christian Bale and Amy Adams provide us with new reminders of why they’re both well-respected actors and big movie stars.  And it’s remarkable that, though the movie is set in 1993, I didn’t think about the Funky Bunch once.

But it’s Russell who lets them down, especially when it comes to establishing motivations for character.  Why does Charlene dig Micky so much?  Why did Dicky start using crack?  Why the hell do Alice and George stay together?

It’s not until the big set-pieces (in terms of both action and emotion) that Russell himself even seems motivated.  He and his camera are energized by Bale’s virtuoso monologues and tics.  He colors the boxing matches to look like the video stock of the time, making them captivating in their garishness.

The final fight and its aftermath are great scenes, worthy of the modern-day

Rocky this movie sometimes wants to be.  It’s too bad the journey there doesn’t make it worth it. 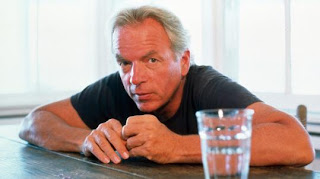 And Everything Is Going Fine

In 1996, Steven Soderbergh made a film of Spalding Gray’s

Gray’s Anatomy.  This one deals with Gray’s eyesight problem but, like all his performance pieces over the years, it is really just a long monologue, well-delivered, about the world as experienced by Spalding Gray.

For as unvarnished as these performances seem to be, they’re really just a projection, the Gray that Gray wants us to see.  As we see him say in Soderbergh’s new documentary, “I like telling the story of life better than living it.”

There is no narrator in And Everything Is Going Fine, save for Gray himself, who died of an apparent suicide in 2004.  The film is presented to us entirely in the form of pre-existing video recordings (of monologues, of interviews, of Gray at home with his kids or his father).  It’s the video part that Soderbergh never lets us forget.  The documentary varies, minute to minute, from high-quality performance footage to glitchy, washed out old tapes.  We are constantly reminded of the medium and of the fact that we are not watching the real Spalding Gray but the version of himself he curated for us.

It’s helpful to know how Gray died but I wonder, if I didn’t know, how would I feel at the end of this project?  Probably like I’d just read a short, melancholy novel.  The character’s hardships and flaws were vivid while I was reading it but once the book is closed, he never really existed.