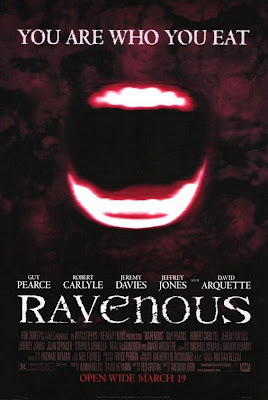 It’s not unheard of to combine horror and comedy. There are certain staples of the horror genre that are really only a step or two away from being laughably ridiculous. Such is the case with Ravenous, a fascinating period horror film about cannibalism. Many of the more insidious lines by the antagonist- slyly played by Robert Carlyle- are delivered with a knowing wink to the audience; as if originally thought up by the Crypt Keeper from “Tales from the Crypt.” Under the steady hand of director Antonia Bird, Ravenous has humor and gore by the bucketful. However, what one wouldn’t expect in a film as silly as this is a strong dramatic side. As the disgraced soldier running from his own cowardice, Guy Pearce proves to be a much-needed stabilizing force amidst the chaos. His character’s journey grounds the film in a deep emotional reality, where a man’s past is ever-present. One warning before watching the film: the brilliant musical score will haunt you for the rest of your life.