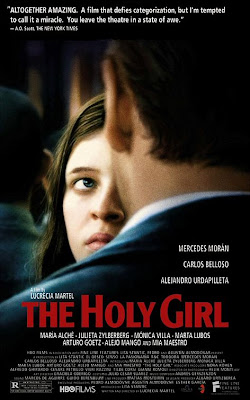 There’s no better cauldron in which to boil the burgeoning sexuality of a teenager than strictly observed Catholicism. Luckily they have plenty of both sexuality and Catholicism in South America, which is why it’s the world’s sexiest continent. Lucrecia Martel’s soft and quiet film The Holy Girl explores the intersection and the muddling of religious and hormonal fervor. Anything that approached with so much passion at the age of sexual awakening is going to be the natural receptacle for repressed urges. So when Amalia, the film’s teenaged heroine, is groped in a public place, her moral and sexual reactions, though technically quite different, begin to merge and mutate. The film is slow-paced but never leisurely, building in just the kind of slow burn that Amalia is experiencing inside.