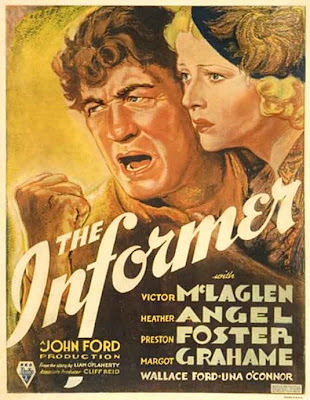 The Informer, largely forgotten in our time, is a very simple film. An Irish low-life rats out his friend to the police in order to collect the reward and move to America. What follows, however, is one of the most complex portrayals of guilt I’ve ever seen. Victor McLaglen won the Oscar for Best Actor, beating out such esteemed actors as Clark Gable and Charles Laughton. Watching his performance, it’s easy to see why. The character’s guilt and self-hatred is so palpable, so emotionally wrenching, that it’s sometimes difficult to watch. But that difficultly serves to make an even stronger impression on the viewer. We can’t forget the plight of Gypo, our protagonist, even if we wish we could.