Movie Recommendation- The Man in the Glass Booth 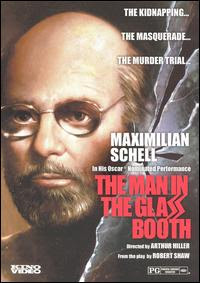 Guilt is one of the hardest emotions to truly capture on film. It can absolutely consume a person, driving them to do extreme, self-destructive things. Such is the case in Arthur Hiller’s The Man in the Glass Booth, in which a businessman is accused of being a Nazi war criminal. Not only does the man appear relieved, he seems positively exuberant that he is finally caught. He is quick to confess, and even quicker to crack jokes and nonchalantly throw around tales of his atrocities. One feels like he is doing this on purpose, as if he is doing it only to make people hate him. Perhaps he wants to be hated. Perhaps he feels he deserves to be hated. Of course, it is soon discovered that the businessman has a secret; one that dramatically changes the way we look at him. He is a figure of revulsion and pity, courageously played by Maximilian Schell. Based on the play by Robert Shaw, The Man in the Glass Booth is about as emotionally devastating as it gets.