Scott Pilgrim vs. The Box Office, by Daniel Bergamini 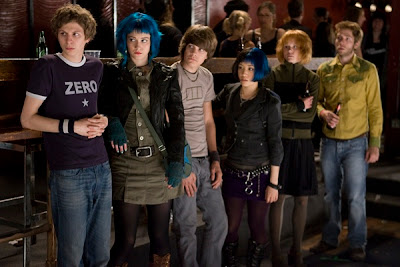 As unlikely a film Edgar Wright’s Scott Pilgrim Vs. The World was for a studio production, it is even stranger that Universal put $60 million on the table for this comic book romance. As most predicted, the film did not do well at the box-office or even come close to breaking even.
Even with the ridiculously glowing buzz leading up to its release, mainstream audiences seemed skeptical of the film, leading to it being a major financial letdown. But while its theatrical run may have been disappointing, with this week’s release of Pilgrim on DVD and blu-ray begins the films real chance for widespread viewing.
Often, films undeserving of the title are advertised as instant cult classics, but when Pilgrim is called that it is probably a fair assessment. If a recent packed screening of the film in Toronto at the Bloor Cinema is any indication, the film is already a cult classic. An hour and a half before the screening a line was already wrapped around the block with fans dressed as the characters battling it out on the street.
It is not so much a question of whether Scott Pilgrim will be considered a hit or not, but when. To the fans, myself included, the widespread reluctance to see this film was bewildering. Even though on its face this film appears to be relevant to only a niche audience, the relationship themes are universal and the references are those anyone who uses the Internet will understand.
You have to ask what kept people from wanting to see this film. Was it the film’s strange concept, the trailer or was it Michael Cera? The trailer and marketing, while off-beat, was certainly not bad, in fact it was quite brilliant.
And it is true that Cera often plays similar characters, in very similar ways, however he is always entertaining and in Pilgrim he shows more talent than usual. Are audiences really that sick of him that they could not bother seeing this critically acclaimed film?
It was as if audiences put an effort into having this film become a home-video hit as opposed to a theatrical one. With the film is out on DVD and blu-ray this week it is only a matter of time before die-hard fans begin to force their friends to watch the film and at that point the general perception of the film should change.
I am fairly certain that Scott Pilgrim will be enjoyed by nearly everyone who watches it. It is a film that rewards repeat viewings as it is masterfully crafted with jokes and gags hidden in the background throughout.
Pilgrim’s box-office failure does not appear to have damaged anyone’s career, especially not Wright’s.  Once everyone starts talking about the film, as fans, we can only say, “I told you so”.