Somebody Might Blow You A Kiss, by Kyle Anderson 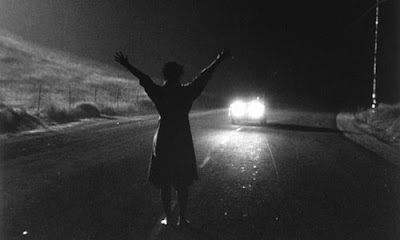 Fade in on a pair of legs running down a dark, desolate highway.  They belong to a woman wearing naught but raincoat, trying desperately to flag down a passing automobile.  The film’s soundtrack kicks in almost immediately with sharp bursts of horns, signifying excitement and danger.  Finally, the woman gets brash and stands in the middle of the road as a white convertible approaches.  The car swerves to miss her and ends up in a bush off the shoulder.  The man inside is less than pleased about being forced off the road, but almost immediately, and, it seems, against his better judgment, he tells the woman to get in the car.  As they drive down the almost pitch-black highway, the credits begin to roll, inverted and coming from the top of the screen, accompanied by the sounds of Nat King Cole on the radio and the woman panting/sobbing in the passenger seat.

This begins Robert Aldrich’s 1955 film, Kiss Me Deadly, an unconventional Film Noir even by Film Noir’s already boundary-pushing standards.  The film was independently funded and the opening crawl tells us that Aldrich not only directed the film but produced it, a ceremonial title meaning he had complete creative control, and it shows. Kiss Me Deadly, is a master class in direction and camera techniques.  For being such a small film, one can find its influence in much higher-profile outings like David Lynch’s Lost Highway, and even Orson Welles’ masterpiece, Touch of Evil. Aldrich’s film, however, is not a pastiche of Noir tropes, at this point in time, it’s cutting edge.  Stark shadows, tracking shots, and low-angles are all considered used here to great cinematic effect.  Filmed on a budget of $410,000 over a period of less than a month, Kiss Me Deadly, is a down-and-dirty movie befitting the characters it depicts.