Stumbling Towards Greatness, by Daniel Bergamini 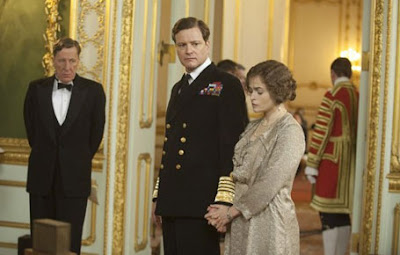 Almost every year, at least one historical drama is released with Oscar dreams. This year, that film is The King’s Speech. The film follows the new and reluctant King George VI as he struggles with his severe stammer during the outbreak of World War II. The plot may sound both dull, as well as a strange story on which to base a film.  However, it is certainly neither of those. The director, Tom Hooper, doesn’t need or attempt to heighten emotions or tensions. Instead, he finds the tension that is naturally in this story. That being said, once the film was finished it didn’t seem to leave any significant mark on me. Leaving the warmth of the cinema, I felt the same as I had when I entered.
As much as I believe this is a great film, expressing how I feel is difficult. The film is technically perfect, with fantastic cinematography and direction. The acting is outstanding, with Colin Firth and Geoffrey Rush giving possibly their best performances ever. With all this, the film should be one of my favourites of the year, but it is not.
While I certainly didn’t come out of the film feeling nothing, I didn’t leave the cinema feeling much. This is something I didn’t expect, as even the trailer managed to get an emotional reaction out of me. The subject matter alone, one which I can personally relate with as I suffered from a stutter as a child, should have been enough to make me feel strongly for the film.
It is a strange feeling, seeing a film which technically has so much going for it, yet was unable to evoke a strong emotional reaction. Although I feel that I need to explain why I didn’t love this film, to ignore the positives of this film would be an utter mistake.
A film such as this would be nothing without strong leading performances. Luckily for the film as well as the audience, the film has several strong performances. Colin Firth, an actor I have never been a fan of, delivers one of the strongest performances of 2010. He does not simply mimic King George, as he makes this man living so far removed from our lives into someone entirely sympathetic and human. Geoffrey Rush, playing the King’s Australian speech therapist, elevates what could simply be a quirky, unorthodox instructor and turns him into the one of the most interesting parts in the film.
Tom Hooper, no stranger to period drama as he worked on HBO’s John Adams, creates an astonishingly realistic depiction of pre-war England. While not revolutionizing the period drama, or even offering anything too fresh, it is Hooper’s exquisite framing of shots that amazed me most. Often with films such as this one, a director is attracted to showing off with cinematography and style, however, Hooper is restrained yet extremely confident.
Far and away the most compelling moments of the film occur between the King and his therapist, as their mismatched friendship grows and the King’s stammer begins to improve. The film leads up to one very important speech, in which it is announced that England is at war. While never filmed like one, the speech scene feels almost like a suspense film. As the King delivers his speech, you are left on edge. Each sentence, each word, each pause is another chance for him to slip and it is nerve racking.
Tom Hooper’s The King’s Speech is no doubt one of the technical achievements of the year, with the fantastic performances, witty writing and beautiful direction, it is not hard to recommend. The further I get into this review of the film, the more I find myself liking it. That being said, it was never a question of whether or not it was a good film, but rather why it didn’t leave a mark on me.