The Most Important Role, by David Bax 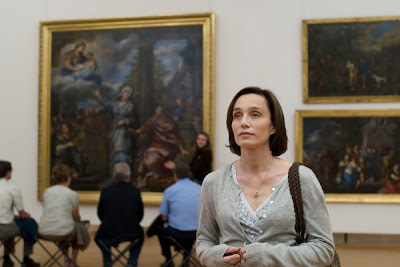 Film is, without a doubt, the most collaborative art form. More people and more separate skill sets and individual visions are required to make a film than to make anything else. Sometimes it’s a wonder to me that so many of them turn out well. The plus side of this is that, excepting gross incompetence, no one person can really ruin a film on their own. Nor can anyone carry an entire film on his or her back. There is, however, one person who comes close to wielding this type of power: the star.

For one thing, the main actor in a scene is the only person involved whose work we’re looking at directly. Costumes and Sets exist in the periphery. Direction is too abstract. Cinematography is something we look through and not at. Actors have the most power in a film because we, the audience, observe them with the most scrutiny. As a result, we are occasionally presented with films that are, on most levels, pretty good but manage to be carried those last few yards to greatness on the backs of their stars.

This year, we’ve had two such films; The Wrestler and I’ve Loved You So Long. Plenty has already been written about The Wrestler and Mickey Rourke’s masterpiece of a performance. Outside of film snob circles, though, Philippe Claudel’s I’ve Loved You So Long, starring the excellent – but often under-utilized in her English-speaking roles – Kristin Scott Thomas, has had tragically little exposure.

Thomas’s role here is not an English-speaking one. The film is in French. (Though born in England, Thomas has switched back and forth between these two languages in films for 25 years). As Juliette, a woman who has just been released from prison after 15 years and is staying with her younger sister, whom she barely saw while serving her sentence, Thomas gives the kind of performance that is riveting and quietly forceful. When she is on screen, you couldn’t look away if you wanted to. In every scene, she manages to convey everything you need to know about Juliette and keep you wanting to know more.

The opening of the film is the proverbial proof in the pudding. We understand that Juliette is a self-contained type of person, introspective but assured. Her distrust of others is deep and learned and she wears it as a badge of pride. She possesses very little in the way of femininity. Nor is she masculine in any way. She is simply human but without any outward expression of humanity. We understand all this after about 30 seconds of Juliette sitting in a chair and smoking.

Now whether this cold, armored shell is who she truly is or what prison has made her will be the subject of the next two hours. I won’t give anything away here. Just know that the journey is a complete one and, even though the plots occasionally veers into melodrama to move itself forward, Thomas’s performance is the straightest, strongest backbone a film could ask for.

I don’t mean to imply that she is the only good thing about this film. As I said before, no one person can carry a film on her back. I’ve Loved You So Long benefits from a good script, direction, score, costumes and supporting performances (particularly Elsa Zylberstein, whom I hope to see more of, as the sister). But every time these parts falter a bit, Kristin Scott Thomas is there to scoop the film up and set it aright. I guess there’s a reason stars get paid more than anybody else.