To War is Human, by Daniel Bergamini 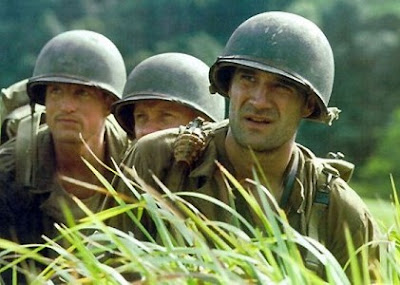 When I first began thinking about writing a review which would in effect declare a film as the best film of all time, I asked myself whether or not I was biased. After all, Terrence Malick is and has been for years, my favorite filmmaker. His films have had a continuing effect on my life and my idea of film that has been so profound I can honestly say his films have changed my life. This is why I feel as if I may be biased calling one of his films the greatest film of all time.

However, after some thought, I realized I was not biased. The fact he is my favorite filmmaker just adds more evidence towards my argument. But as much as I would like to call Terrence Malick’s The Thin Red Line the greatest film of all time, I do realize I cannot. I have not come close to seeing every film ever made, making that declaration not very accurate. That being said, I can confidently say that I truly believe this film is one of the greatest accomplishments in cinematic history, as well as being my favorite film of all time.

I have discussed previously on this blog whether or not Lawrence of Arabia is the greatest film ever made. While I still stand by my review, I have realized that while the film tells more about one human being than possibly any other film, it doesn’t tell us much about humanity as a whole.

This is where Terrence Malick’s greatest achievement, The Thin Red Line, comes in. His film, which is on an equally grand scale as Lawrence of Arabia, doesn’t tell the story of one man, or even one group, rather, it tells the story of dozens of men and through its own success, tells us about humanity as a whole. While it is undoubtedly an anti-war film on the surface, the point it is making isn’t a comment on war, but rather a comment on what it is to be human, and all the unanswerable questions we must ask ourselves.

Taking place during the second world war at the battle of Guadalcanal, it opens with Private Witt, played by James Caviezel, an AWOL American soldier living with the natives of the island. Just as we get to know this man, the film shifts focus to another soldier, and from there we are constantly moving perspectives. Unlike previous Malick films, the narration is not coming from one character, instead it is coming from almost every character we meet. While at times we will return to the perspective of someone we have already met, others we never see again.

During post-production, Malick instructed his editors to edit the film as if it was a river, and this is exactly how the film feels. It is constantly flowing, changing focus but always moving forward. In general, frequent change of perspective can leave a film feeling impersonal. This is something Malick has been accused of. That being said, with repeat viewings, I find it strange that anyone could feel this way about the film.

While I cannot write a review of The Thin Red Line without mentioning John Toll’s stunningly beautiful cinematography, unlike many people I do not consider that the great accomplishment of the film. Since Malick’s first feature, Badlands, he has proven his ability to capture beauty in just about any situation. As he continues to do this with seemingly no effort, it is the use of narration that Malick has been progressing and perfecting since his first film.

Unlikeable characters become human, side characters become fully fleshed out, all due to his masterful use of narration. We become fully immersed in these people, as we can relate to the feelings, questions and pain they feel. The example that best displays the power Malick has, is that of Private Bell, played by Ben Chaplin. He is one of the characters we spend the most time with, as he thinks of his wife back home, the love they feel for each other and whether or not he will one day return to her. Through flashbacks and reminiscent thoughts, we see the beauty and love between these two characters, and once Private Bell receives a letter from his wife requesting a divorce, we feel utterly devastated. No scene nor entire film has ever affected me as strongly as that short sequence does.

When The Thin Red Line was released, it was unfairly overshadowed by Spielberg’s Saving Private Ryan, leaving Malick’s masterpiece to be only remembered by film fans. It is possible general audiences do not have the patience to fully grasp the film as it is a film that not only deserves, but demands full concentration. To fully appreciate the film, one must fully give into the beauty on screen, the truth held in the dialogue and narration. I can safely say, if people were to turn off their cellphones, not check their emails or talk, and be enveloped by the film, all those other things will seem minuscule compared to the greatness that is The Thin Red Line.