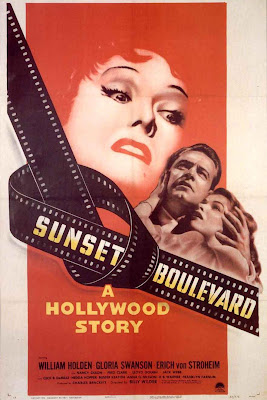 directed by Billy Wilder
For all its promises- wealth, fame, etc.- Hollywood has become known as much for destroying dreams as fulfilling them. Whether you’re a has-been or a never-was, Tinseltown can always find a way to let you know that you have no inherent worth. How does such treatment affect the human psyche? Not well, it turns out, as we see the sad case of Norma Desmond, a former starlet whose fame well dried up years ago. Once the center of Hollywood’s attention, Norma has been forgotten. She clings to what little fame she has left, deluding herself into thinking she’s still relevant. This would all seem pretty harmless- and more than a little pathetic- if it wasn’t so dangerous to those around her. Like a sad spider spinning a web, Norma has a way of collecting people, turning them into production assistants in the epic movie of her life. In other words, she has become Hollywood incarnate.