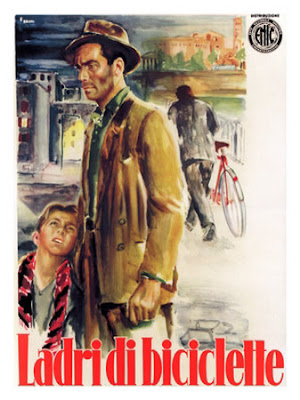 directed by Vittorio de Sica
One war over, another just starting. In postwar Italy, times are tough. Jobs are scarce. If you can get one, you do what you can to keep it. When a man’s bicycle is stolen, he goes on a quest to get it back. He needs his bike for work; without it, he has no hope of providing for his family. His son tags along as he pathetically attempts to locate the thief. Finally, in his sad desperation, he finds himself becoming something that he never would have imagined. As he nobly tries to maintain his stoic pride, we see the horrible effects of poverty. Vittorio De Sica’s neorealist approach makes us feel as if we’re watching a documentary, making the proceedings even more heartbreaking.