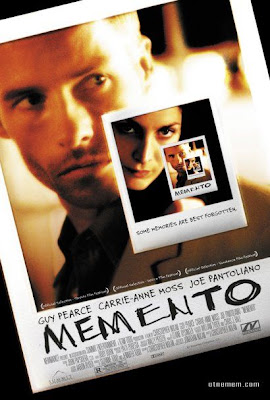 directed by Christopher Nolan
Memento is one of those films that everyone sort of feels like they helped discover. I remember seeing it 3 consecutive weekends with different people each time. It’s also that good and that interesting. It’s become an unfortunate target these days of logical inconsistency of the most inconsequential type. Guy Pearce gives an impressively remote performance as Leonard, who has short-term memory loss and is looking for his wife’s killer. He tattoos clues on his body and writes furiously to remember details. The film, which launched Christopher Nolan’s to A-List for directors, is told backwards, with a black-and-white section leading to something from an unknown point, until the two converge. The style of the film enhances its subject and its themes of revenge and truth are viewed with powerful originality.