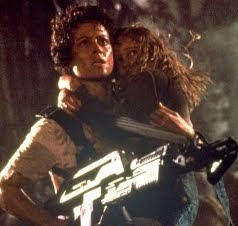 played by Sigourney Weaver in Aliens

Sigourney Weaver’s character is greater than any costume or special effect. Four movies featuring the most terrifying monster cinema has ever offered and yet she’s the most fascinating thing on the screen. Make no mistake; this franchise is not the story of the aliens but that of Ellen Ripley.