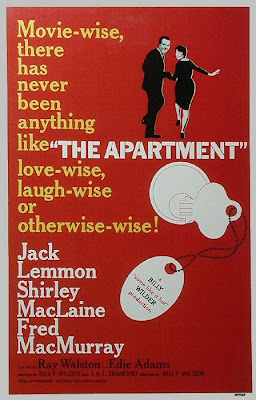 directed by Billy Wilder
Everything about the first hour of Billy Wilder’s Best Picture winner is a comedy: Jack Lemmon’s near-dainty, fast-forwardy shtick, the pure comic situation, the physical humor, the characterizations of his coworkers, and the music. But then something happens at the office Christmas party, and the movie becomes a drama that rests almost entirely on the solid and sad performance of Shirley MacLaine. While the un-blinking presentation of personal moral compromise for the sake of a better job or a better romance is what won it several Oscars, and is what makes it still relevant today, one is left wondering if the main character of the first half really has what it takes to handle the main character of the second half. Our clue comes when it is she who says, “Shut up and deal.” Wilder and I.A.L. Diamond won an Oscar for the screenplay.