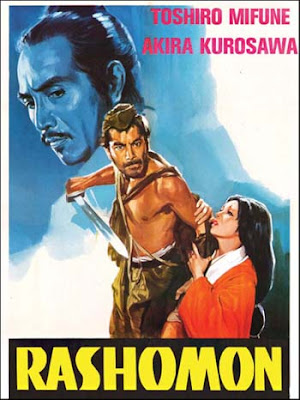 directed by Akira Kurosawa
My personal favorite of Kurosawa’s films, Rashomon is an emotional epic which takes place, essentially, in 3 static locations: The temple, the court, and the forest. A man has been murdered. His wife, a bandit, and the dead man (through a medium) recount what happened, as does the man who found the body. But none of the stories are the same. Kurosawa essentially introduced cinema to the unreliable narrator, and the film, in many ways, is about the information the different audiences in the film receive and how that information is interpreted. As Robert Altman says on the DVD’s introduction, “All of the stories are true, and none of them are true.” The way a certain character tells a story tells you vital information about that character, and only then can you begin to piece together which information may be true about each version. Kurosawa provides a distinct look for each locale, as well, which affects how the information is seen. Trees hide much in the forest, rain pours down on the temple, and just because the characters in the court are looking directly at the camera does not mean what they’re saying can be trusted implicitly.