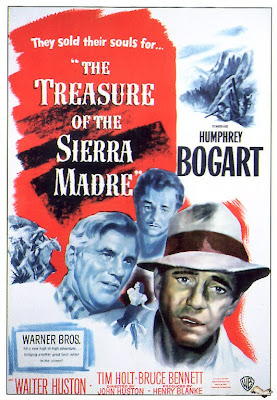 directed by John Huston
By the end of the first hour, you feel like you need to wash off the dirt. John Huston’s sprightly-paced movie is an object lesson on the predictability of human nature wrapped inside a highly entertaining adventure. Seasoned prospector Walter Huston (Best Supporting Actor Oscar) leads penniless Humphrey Bogart and Tim Holt into the gold-rich hills with promises of paydays – and warnings of the destructive power of greed over friendships. Then we watch alongside the old man as paranoia, fatigue, and the treasure itself confirm his worst predictions. John Huston won Oscars for Direction and Adapted Screenplay.