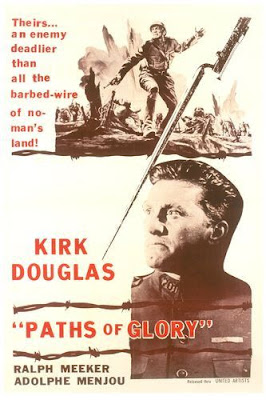 directed by Stanley Kubrick
Kirk Douglas is the idealistic World War I regiment colonel ordered to lead his men into an impossible mission in Stanley Kubrick’s masterful anti-war film. When the mission predictably fails, three soldiers are chosen at random to pay for the sins of cowardice for the entire regiment. The “bad guy” might be painted a bit broadly (the scar; his rallying of the troops with a chirpy “Ready to kill more Germans?”), but the illustration of power and pride laid bare even as innocents are sacrificed in their name, is as damning today as it was then. Great performances from all, including the condemned soldier Timothy Carey, who adds his brand of strange hopelessness to the already absurd events.