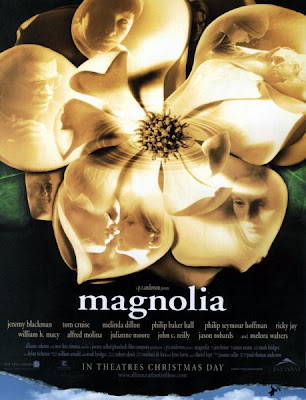 A labyrinth of connection and pain, loss and hope, Paul Thomas Anderson’s 3-hour intimate epic follows over a dozen people on a collision course with the past. The cast includes Philip Seymour Hoffman, John C. Reilly, Philip Baker Hall, Julianne Moore, Jason Robards, William H. Macy, and Tom Cruise, all giving stunning, heart-wrenching performances. Anderson’s writing and direction are dazzling in both their complexity and detail, and his scope is nothing short of operatic. This is one of the most ambitious films of the last 20 years. If you like your movies neat and tidy, you will be confounded and exasperated. If you do not enjoy 8-minute prologues on chance; if you refuse to allow your characters to spontaneously burst into song; if you are unwilling to accept a hard right-turn in the film’s third act, you aren’t going to like this film. But if your idea of perfection is a little different and contains some jagged edges and interesting angles, then Paul Thomas Anderson has a very interesting concoction waiting for you, and I think you’re going to like what you see.