A Child To Lead Them, by David Bax 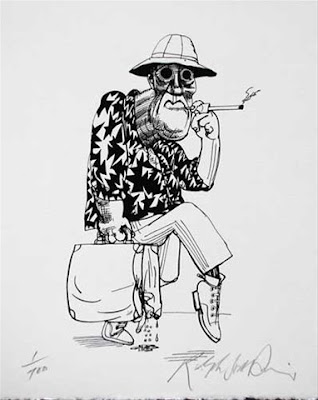 The upcoming election and the coverage surrounding it, along with the fact that I recently saw Gonzo: The Life and Work of Dr. Hunter S. Thompson, has had me thinking a lot about Thompson’s work. Why it was so memorable, so inspiring, kind of important. I’ve also been thinking about why we don’t have anyone like him today and whether we should.

One of the many talking heads in this film points out that Thompson’s worldview was very childish. There was good and there was bad and there was very little room for anything in between. I immediately recognized this as truth. I loved Thompson when I was younger for much the same reasons I loved the Dead Kennedys. Both gave me subversive points of view that made sense without giving me too much to actually think or be confused about.

Today, my feelings about Thompson are again the same as my feelings about the Dead Kennedys. I respect their craft while finding them both a little silly, but I owe a lot of who I am to them and artists like them.

Thompson will no doubt continue to inspire teenagers to become misanthropic outsiders for generations to come. But, with each passing year, the kids who wear out copies of The Great Shark Hunt will be forced to identify with a country and a mindset that is more and more alien to their own. Our current situation is dire enough and our cultural divide wide enough to warrant a new Hunter Thompson and I’m not sure we have one.

Sure, Thompson wrote about President Bush and other neoconservatives but he hadn’t really been the paradigmatic Hunter S. Thompson since the mid-1970’s (a fact that Gonzo, to its credit, makes quite clear). Who will be the journalistic standard-bearer of our times? Will teenagers of the future obsess over Chuck Klosterman and learn to retreat from political concerns into pop-culture minutiae?

We certainly have our fair share of childish journalists on both sides of the spectrum today. But they’re not childish in that Hunter S. Thompson way. They’re unthinking and obedient. They’re good children. Thompson was a terror. He was the kind of unruly, authority-spurning, ADD-ridden brat child that annoyed his parents and teachers more than he did anyone else. And he was on nobody’s side but his own.

Hunter S. Thompson’s generation has gained a reputation for losing their culture war and then eventually selling out. But, without guides like him, our generation may be remembered for doing the same things in the opposite order, which is far worse.