Ain’t We Got Fun? by Daniel Bergamini 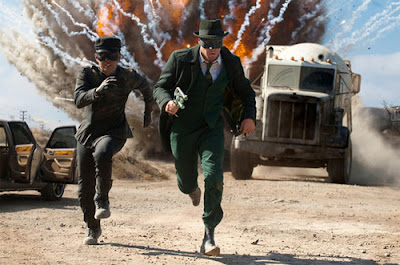 What does it say about a film that leaves you feeling slightly embarrassed by the fact you enjoyed it? Does it signal that maybe the film isn’t very good, or maybe that people have been too hard on it. This is how I felt about Michel Gondry’s The Green Hornet, a superhero film that, while not striving for greatness, is incredibly enjoyable. Leaving the theatre, having just spent an hour and a half with a big smile on my face, I couldn’t help but remember all those incredibly negative reviews.

The Green Hornet, produced and co-written by Seth Rogen, is a re-telling of the classic radio and TV show that  introduced Bruce Lee to North America. The film follows the adventures of Britt Reid, slacker son of now-deceased newspaper mogul James Reid, as he deals with the death of his father by fighting crime, or at least attempting to. Reid and his partner in crime, Kato, act as villains to take down Chudnofsky, played by Christoph Waltz, and the corrupt politicians of Los Angeles.

The story is one we have seen and heard dozens of times before, and The Green Hornet doesn’t do much to differentiate itself from the other action and superhero films in terms of plot. Even with the less than original story, the film manages to move past that and be incredibly enjoyable.
Many worried that Seth Rogen would leave too much of his own mark on the film, and unfortunately for some, he certainly did. However, his take on the material worked just fine for me as the so-called “bromance” that Rogen makes the main focus of the film is the most interesting aspect. Behind all the action, gadgets and plot, is more importantly the growing friendship between Britt and Kato, played brilliantly by John Cho. It is something I did not expect from a superhero film as so often friendship rarely plays a role.
Michel Gondry, who directed the film, does a great job of infusing his style while never letting it become a distraction. I have to admit that I am a huge Gondry fan, and his stylistic choices always interest me. Many have commented  that because Gondry’s style wasn’t more apparent that he somehow failed as a director. I believe just the opposite. If he had, for instance, used the same aesthetic he did for The Science of Sleep, the film would have failed. Instead, he went about directing the film as a action film seen through his eyes.
The Green Hornet may not be a perfect film, in fact, it certainly isn’t. Instead it is a fun and entertaining superhero movie. However I still feel as if I should be embarrassed liking this movie. I am a sucker for Gondry and Rogen, and their partnership in this film  has led to a very unique superhero film. Many seem to be overly negative about this film simply for the fact that Rogen has added comedic sensibilities to The Green Hornet. I would argue that most of these people aren’t fans of the original material. It is as if they dislike this new approach simply for the premise and not the execution. I know many will disagree with me on that one, yet I would rather see The Green Hornet than Iron Man any day. In many ways the unlikely friendship and teaming-up between Reid and Kato reflects the unlikely partnership of Rogen and Gondry on this film. Unlikely sure, but awkward, certainly not.