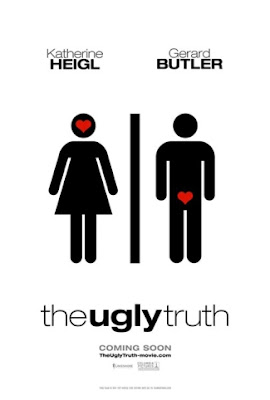 I can’t be the only person to look at the above poster and cringe. I understand that this poster is meant to be very simple, explaining the film’s central conflict in a single image. I’m sure that, if pressed, the designer would say that he was just trying to capture the spirit of the film. And, indeed, the message is very clear: a woman’s true heart is in her ability to think and reason, whereas a man’s true heart lies solely in his sexual impulses. Underneath, the title confirms the art. Much as we hate to think it, this is the ugly truth. We all know it. It is this dynamic that the director will spend two hours exploring, with hilarious results. Undoubtedly, the chauvinistic male character will learn that there is more to life than just getting laid. And, against her better judgment, the empowered female character will realize that she is falling in love with this man. That her falling in love coincides with his eventual realization that he is wrong goes without saying.

We’ve seen films like this a million times before, and I’ve never liked it. But, somehow, The Ugly Truth so exemplifies what can go wrong with the romantic comedy genre that I literally can’t take it anymore.

One could make the argument that the message of this movie is harmless; nobody gives it any weight, so what does it matter? It’s an inherently breezy genre that people will watch and forget the moment they leave the theatre. But we don’t really forget, do we? The message that men have no sense of romance or empathy- and are in fact lustful animals that require civilization by the female of the species- has been so hammered into our psyche that it is considered acceptable entertainment when Patricia Heaton verbally abuses Ray Romano on network television. If the roles were reversed, this wouldn’t be considered a sitcom at all; rather it would be a one-hour drama on HBO.

When I see movies like The Ugly Truth or watch shows like “Home Improvement,” I am offended. These entertainments send the message that men are insensitive, idiotic horndogs who can never admit when they’re wrong. We are told that we men need constant guidance and correction in order to function like people (which is to say, women). We need somebody like Will Smith in Hitch, a film whose tagline is “the cure for the common man.”

I really don’t know if anybody else is as frustrated as I am about this. I’ve had people laugh at my impotent rage over this subject, but that doesn’t change the fact that there are commercials out there like this one, which literally uses the foregone conclusion that men are wrong and women right to sell breakfast cereal.