Calling Down the Thunder, by Tyler Smith 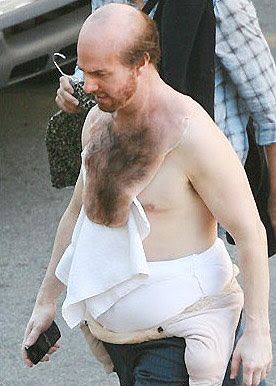 There’s been a lot of talk about Tom Cruise’s performance in Ben Stiller’s Tropic Thunder. For good reason. His Les Grossman, a fat, hairy cartoon of a man, is the ultimate embodiment of the corporate Hollywood mentality. Like a mixture of Rupert Murdoch and Lex Luthor, Grossman treats people as mere commodities. As long as you can help him make money, he’ll fight for you. The minute you hamper his financial progress, you’re worthless.

Grossman is extremely well-written, especially to those of us who have had contact with fussy studio executives. As over-the-top as the character may seem, everything he does or says seems frighteningly plausible. That we buy this character is a testament to Tom Cruise’s commitment to the character. He could choose to wink at us through all that make-up, as if to say, “Isn’t this awesome, what I’m doing?” But, he doesn’t. He plays it straight. And the character is funnier for it.

All that said, I don’t think casting Tom Cruise was the right choice. A character this unique and memorable should be allowed to be funny on his own terms. While there is widespread agreement that the character is funny, my guess is that most of the laughing was not a function of the character himself. I think that most people weren’t laughing at the things that are said, but at the fact that it is Tom Cruise saying them. Tom Cruise of Jerry Maguire and Mission: Impossible! In a fat suit! That’s hysterical!

As I said, none of this is the fault of Cruise himself. His performance is flawless. But, the fact is, people are laughing for the wrong reason. There are plenty of other actors out there who fit the physical profile of the character that could have done just as well. Off the top of my head, I can think of three that would have been perfect.

Danny DeVito, Paul Giamatti, Philip Seymour Hoffman. All three of these men would have committed to the role, just as Cruise had done. But, rather than laugh at the funny makeup and clever bit of stunt-casting, we’re doing what we’re supposed to do: laugh at the character.