Does Pixar Get A Free Pass? by David Bax 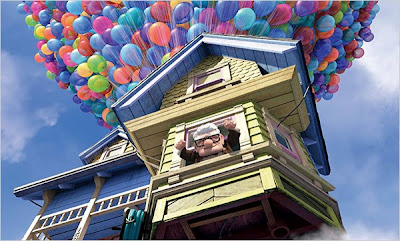 So, I finally got around to watching Up and I liked it. It’s a good movie.

But it’s far from perfect, which should be fine, except that no one mentions it. I’m afraid we’ve all bought into our own assertion that Pixar can do no wrong to the point that we’re embarrassed to admit to any flaws at all. Maybe we film nerds need to get in a circle, support group style, and take that first step together, admitting that we have a problem. Wall-E was great but, come on. Wasn’t the satire a tad juvenile and on-the-nose? Ratatouille was wonderful, but really? You can manipulate a person’s body by pulling on his hair?

I found myself having the same problem while watching Up. Yes, this is a moving, intelligent and very mature story of a man dealing with his wife’s death and the feelings that’s brought up in him, not just grief but guilt and self-pity. But there are occasional flights of fancy wherein I found myself watching some movie I was not watching a few minutes before. These moments were well-executed but their somewhat jarring inclusion prevent the film from true greatness. And that’s okay. Few movies are truly great. The fact that Up comes as close as it does is more than commendable. Can we please just stop pretending that every Pixar film is a masterpiece?

Speaking of masterpieces, there have been, in my opinion, two of them produced by the studio: Finding Nemo and The Incredibles. Two masterpieces in the same decade is a pretty stellar track record. My advice is that we be happy for that and evaluate all future Pixar films on a case by case basis. Otherwise, when they inevitably slip up, we’ll all look like Buzz Lightyear insisting, against all reason, that he can fly.