Hans Down, by Tyler Smith 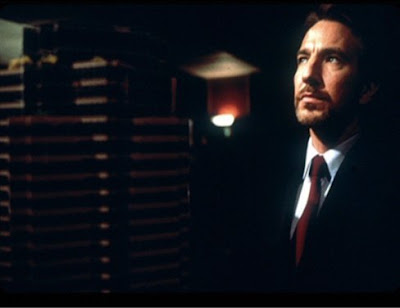 I am gonna regret this in the morning.

There is something that I have been hiding for a long time. I am usually pretty open about my opinions, but I have remained silent on this, for fear of social rejection and scorn. When this topic comes up in conversation, I find myself trying to change the subject. I can’t do it anymore. I can’t censor myself. I have to speak my mind, no matter what the consequences. Here we go. I am not a huge fan of Hans Gruber.

Yeah, I said it. I’m not proud of it. I’ve done all that I can to align myself with the popular public opinion that he is one of the best villains of all time, but to no avail. In the cadre of great film heavies, I just have a hard time viewing him as one of the absolute best. I find him to be very cold and calculating, which I know is the point. He is to serve as the antithesis to cowboy protagonist John McClane, which means being precise and emotionless. He is ably played by Alan Rickman, who portrays him with such emotional detachment, he seems as if he is just a businessman at his office, rather than a thief and murderer.

The character is written and acted perfectly well, and yet I’ve often considered him to be merely functional, rather than memorable. For me, the villains that I consider to be the best are those with an unusual attitude toward their own villainy. They’ve either learned to live with their evil choices, like Harry Lime, or have convinced themselves that they’ve done nothing wrong, like Little Bill from Unforgiven or Mrs. Iselin in The Manchurian Candidate. For other villains, their evil comes from their philosophies. Such is the case with Mitch Leary in In the Line of Fire or John Doe in Seven, whose brutal crimes seem to stem from their nihilism. There are psychopaths, such as The Joker or Anton Chigurgh, and there are the villains who clearly hate themselves, such as Archibald Cunningham or Hans Beckert.

These antagonists are fascinating to me primarily because they do not conform to the typical pattern of the villain. Gruber, on the other hand, typifies what an action villain is; he has a selfish goal and will do whatever he has to do to achieve it. There is of course nothing particularly wrong with this type of villain, but what is there to separate him from Auric Goldfinger or Mr. Joshua or Howard Payne? What about Alain Charnier from the French Connection or Major Strasser from Casablanca? These are bad guys who serve a very definite purpose in the story, and are played perfectly, but few would call them anything more than functional.

Hans Gruber, solidly written and acted though he may be, is one of these villains. His motivation is as clear as his resolve. One can watch Die Hard with a basic screenwriting book and tick off Gruber’s actions one by one. At every point, he does what a villain is supposed to do. Again, there is nothing at all wrong with that. The problem is, there’s nothing really extraordinary about it, either.