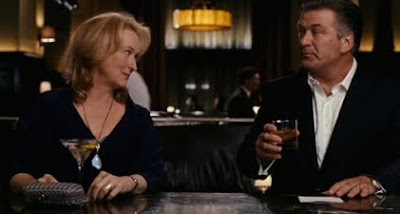 Maybe it’s out of a sense of obligation that Nancy Meyers feels she needs to make comedies. Perhaps she thinks that it’s what people expect of her and she doesn’t want to disappoint them. Whatever the reason, Nancy Meyers should stop.

Because the basic concept for her new film It’s Complicated is essentially very good. A middle aged divorced couple (Streep and Baldwin) unexpectedly find themselves in the throes of passion once again. This situation causes a great deal of confusion and pain for the both of them, but they’re determined to discover exactly what it is in themselves that was apparently yearning for this reunion. The story has all the elements of a touching drama. Add in a cast that includes Meryl Streep, Alec Baldwin, and Steve Martin, and you’ve got yourself the makings of a pretty memorable little movie.

Unless, as I mentioned, you feel compelled to make it a comedy. And herein lay the problem of It’s Complicated.

The characters in this film are required by the writer to engage in ridiculous behavior. There are the giggly scenes between Streep and her one dimensional friends, there to support or question her actions as needed. There are scenes of middle aged nudity, which is not bad in and of itself, but these very adult characters react as if they were once again six years old and human anatomy is a new and exciting discovery. And, just when you thought we filmgoers had seen enough scenes of dignified actors playing stoned, we get extended sequences in which all three of our protagonists get high at a party and spend the next ten minutes of the film laughing at nothing.

We have John Krasinski of “The Office” showing up from time to time as Streep’s soon-to-be son-in-law. He serves no real purpose to speak of, except for a couple cheap laughs as he attempts to distract his fiance from the dalliances of her parents. Oh, and, in one scene, he shows up wearing women’s pajamas. Krasinski does what he can, but isn’t given much to work with.

The same can be said of our three leads, as well. Streep, in what can only be described as the “Diane Keaton” role, manages to motivate even the silliest of emotional beats. It’s always a pleasure watching Meryl Streep act, but this is one of the few films where I actually felt like I was watching her work. Every moment she spends giggling like a child (and there are many) just made me cringe. Streep deserves better material than this.

Steve Martin is, by all accounts, a very mature and cultured person. His over-the-top work in films like The Pink Panther are clearly what he does to pay the bills, while he puts his real effort into work like Shopgirl. The man can seem like a fountain of intelligence and wit when the project allows. In this film, he is given the fairly thankless role of “the nice guy.” It is his job to smile patiently as he is emotionally jerked around. Martin’s effortlessness in the role is very refreshing, but that doesn’t change that the character itself is pretty one note.

Now we come to Alec Baldwin, whose resurgence as a brilliant comedic actor continues unabated in this film. Much like Streep, he mines what he can from a character that spends most of his time acting totally outrageous. Baldwin takes this collection of mannerisms and inappropriate sex chatter and crafts a pretty solid character. It is to Meyer’s credit that Baldwin’s character is not simply the “sleazy ex-husband” type, but is allowed to be a legitimate contender for Streep’s affections and Baldwin brings him to life in a way we don’t expect from a bland romantic comedy. His character seems vital and real, even when he is doing completely unrealistic things.

Streep and Baldwin have three children, but they are treated as largely an afterthought by the film. They keep popping up, but Meyers doesn’t seem to know what to do with them. No bother, however, as she seems to be unable to write for any character that isn’t middle aged and neurotic. Here, the children spend most of the film either wide eyed and wounded or sunny and smiling. We are not really shown much of who the children are as people; they mostly function as moving pieces of set decoration.

The children’s relationship with their parents is just one of many unexplored dramatic possibilities in this film. There is a lot of potential here to really delve into topics such as marriage, divorce, aging, and more. Much like Meyer’s 2003 film Something’s Gotta Give, she deals with some of these issues in a perfunctory way, but her penchant for the broadest possible comedy gets in the way.

There are a few quiet moments in the film, in which the emotional center of the story is allowed time to walk around and stretch its legs. In these moments, Streep and Baldwin reflect on their marriage and life after divorce. The marriage fell apart seemingly due to Baldwin’s infidelity. In one of the powerful moments of the film, Streep reveals that perhaps she was partly to blame for the marriage falling apart, but that, in Baldwin’s affair, she had the perfect excuse to take no responsibility for her own actions. It’s a startling revelation and denotes a maturity on the part of the writer.

Moments like these, both well written and beautifully acted, only serve to make the rest of the film more frustrating. If only Meyers had followed where her characters were leading, we would have a much better, more satisfying film. One in which we are able to spend time with lived-in characters at a confusing moment in their lives, trying to figure out what the future holds.

Alas, it was not to be. Nancy Meyers makes comedies, dammit, not drama!

And so we are left with a film in which we get an “hilarious” scene involving Alec Baldwin’s bare ass, a horrified Steve Martin, and a live webcam. Bravo, Meyers.