Jacked Up, by Mike Vanderwyst 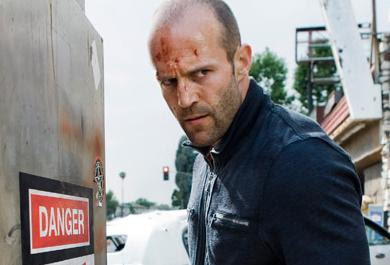 Imagine jacking up a car, turning on the ignition, then holding the accelerator all the way down. The engine roars, the wheels spin wildly, and the heat gauge climbs. But the car goes nowhere.

I felt like Crank 2: High Voltage was a jacked up car. It’s fast and crazy. It’s action-packed, adrenaline-fueled, and bursting at the seams with relentless energy. The first Crank was like this, as well, but I found High Voltage disappointing because it lacked the clear and focused direction of its predecessor. The first film employed a very simple plot that made sense, and it was actually plausible. Adrenaline in the human body can actually be used to fend off certain poisons, which was the basic premise of the first Crank. The resulting adventure that ensued was only fun and comedic because it stood on plausible grounds.  Without any basis in reality at all, any attempt at comedy is drowned in a sea of unbelievable claims.
With High Voltage, I was immediately put off by the fact that the main character had to give himself violent jolts of electricity to sustain his artificial heart. Many of those violent electric shocks endured by the character throughout High Voltage were strong enough to kill an average human being – if not hospitalize him/her for some time. Besides this, I always thought that once a person’s heart starts losing its beats, the person generally experiences chardiac arrest. Instead, the lead character in High Voltage often waits several minutes after we hear his heart start slowing down before he gets to the next electric shock.
The plot devices are so over-the-top and contrived; from a stop-motion-animated fist fight between enlarged versions of the characters tossed carelessly into the action, to a bumbling prostitute that required subtitles in order to understand her broken English when there was no need to have a foreign-language speaking character in the film at all, this film suffers from an inflated opinion of itself that seemed to think that anything it tossed into the mix would be funny. My reaction was to instantly disconnect myself from what I felt to be senseless humor. I even caught an impossible bullet kill that should have taken out the lead character first, but instead passed magically by his head.
I was impressed with much of the technical accomplishments the film achieved. Using pro-sumer camcorders that anyone can purchase at their local electronics store (this was an intentional artistic choice), the filmmakers were able to explore new and innovative ways to capture extreme action. After reading an article about the look the filmmakers’ were attempting to create, I must say that they succeeded well in that regard.
But for me, it all comes down to story. There were a few humorous stand-alone set pieces, but it seemed so carelessly scripted. “Anything goes” was the dominant thought process, and I didn’t find it nearly as interesting as the simpler, well-disciplined script from which the first Crank was shot.