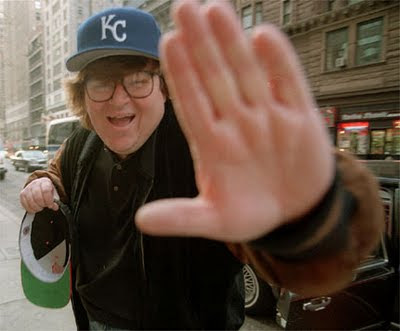 I didn’t expect this to be a good film. I really didn’t. My misgivings about filmmaker Michael Moore’s dubious tactics aside, there’s no question that the slew of straight-to-video retaliatory movies made in response are pretty bad. Often, they’ve been made by people that have no filmmaking experience. They are as sloppily constructed as Moore’s films are technically brilliant.

For all the anti-Moore films that I had seen, I was hesitant to watch Michael Moore Hates America. With a title like that, who could ever hope for subtlety or nuance? Any director that picked that title surely must be unable to craft a watchable film, right?

Turns out that my reservations about Michael Wilson’s film were largely without merit. Despite the inflammatory title, this movie tries as hard as it can to be truthful, ambitious, and comprehensive. As one would expect, there are budget constraints; this is never more clear than when Wilson attempts to mirror Bowling For Columbine‘s animated NRA sequence with one of his own. The animation is shoddy, and it detracts slightly from the point he winds up making.

What Wilson lacks in financing he makes up for in honesty. Perhaps the most powerful moment in the film is when Wilson lies to a subject about the nature of the documentary in order to get an unbiased reaction. Afterward, there is a discussion between Wilson and his producer about resorting to Moore’s methods. Wilson sends a letter to the subject coming clean. The subject writes back, stating his disappointment in Wilson’s deception, but allowing the footage to be used anyway.

Wilson didn’t have to use the footage of his producer’s dissenting opinion. He didn’t have to tell us about sending the subject the letter. He does anyway. Why?

Perhaps because, briefly, he realized just how easy it is to tiptoe across our own moral boundaries when we believe ourselves to be on the side of right. For just a moment, Wilson saw what it was to be Michael Moore, a man whose unquestioning belief in the purity of his own motives has led him to mislead millions of filmgoers.

It’s the clearest example of Wilson’s approach to the material. Many of the other anti-Moore films are merely reactionary. Wilson has chosen to make his frustration with Michael Moore a jumping off point; an opportunity to talk about larger things than his quibbles with one filmmaker. He also seems to see it as an excuse to show us the America that Moore so often disparages.

Wilson talks to rich people, poor people, soldiers, business owners, and countless others. The portrait of America that is created is one of promise and optimism. An admission that we’re certainly not where we should be, but an acknowledgment that we’ve come a long way in relatively little time. Interview subject Penn Jillette sums it up nicely by stating that, taking large chunks of history at a time, we’ll find that there are two things that are always true: the world is always getting better and there are always people claiming that it’s getting worse.

Michael Moore Hates America is a surprisingly humble attempt to show the other side of the conversation. Moore has constantly stated that the majority opinion is on his side, which is why he has had so much success (a decidedly free market way of thinking, it should be noted), and so it would seem to those of us whose opinion of Moore’s work is not very high. Living in Los Angeles and having previously lived in Chicago, I can attest to being in the minority when it comes to my feelings on Michael Moore.

However, what Wilson shows is that there are plenty of people out there that see Moore for what he is: a shameless- yet talented- propagandist. Most notable among these people is Albert Maysles, a pioneer in the documentary field, responsible for such brilliant works as Grey Gardens, Gimme Shelter, and Salesman. Maysles’ views on what makes for a documentary seems to stand in direct opposition to those of Moore. He feels that a documentarian must first find a way to love his subject (or at least attempt to understand it) before making a film about it. This love will engender a desire for honesty. Moore, he says, is motivated by a hatred for his subjects, which leads to an urgent call to do anything and everything to help others hate them, too. As documentary is arguably a search for truth, we can only conclude from Maysles’ philosophies that Moore, while having considerable talent in filmmaking, leaves a lot to be desired as a journalist.

I went into this film expecting to be told things that I already knew in a way that simply wasn’t compelling; a meager first attempt at filmmaking by a conservative reactionary. What I got instead was a sensitive, personal film made in defense of an America that Michael Wilson truly loves and believes in. I’ll be the first to say that there are a lot of things wrong with the country. In fact, a few of my opinions would probably be shared by Michael Moore. But when the film was over, I found that I felt proud of the country in which I live and optimistic about both its future and my own.

As Jillette commented, given enough time, things are always going to get better, but some will only ever see it getting worse. I think that those people are necessary; we need people that are dissatisfied with how things are. But I think we also occasionally need somebody to remind us where we’ve been and how far we’ve come. That’s what Michael Wilson attempts to do with Michael Moore Hates America, and the result is a film that is both uplifting and compelling.