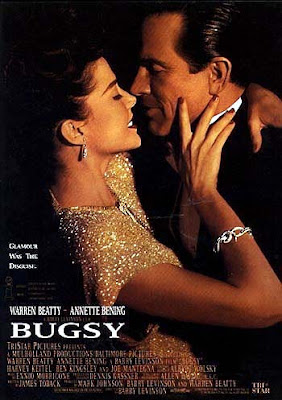 Style and substance don’t always have to be at odds with each other. Often, one will be neglected in favor of the other. Movies that do this can still be good, but the truly great films are those that achieve the perfect balance between the two. Barry Levinson’s Bugsy manages to have all the glitz and glamor of 1940s Hollywood while never shying away from the darker, more complicated layers of gangster Ben “Bugsy” Siegel. Here, Siegel is a handsome man whose extensive wardrobe seems to be his primary concern in this life. He is a charming womanizer whose singular vision eventually led to the creation of Las Vegas. Everything about him is perfectly-tailored and practiced. It is all about image. And yet, for all of his work to create an elegant, cultured mask, Siegel cannot hide his violent upbringing and unbalanced temper. Played with surprising commitment by Warren Beatty (in what is probably his best performance), Bugsy is totally unpredictable. His actions are no different than those of his fellow mobsters, but his veneer makes him seem more like a movie star than a criminal. It is Levinson’s perfect handling and balance of both of these sides of Ben Siegel that makes Bugsy such a satisfying film to watch.