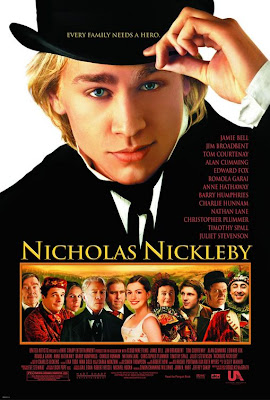 In high school, I thought I was too cool for Charles Dickens. I thought his sprawling narratives with innumerable characters and outlandish coincidences were nothing more than soap operas in fancy clothes. Luckily, in the decade since then, there have been intelligent filmmakers to interpret his stories in ways that make me realize I was a fool. Though Dickens’ plotting lends itself to melodrama, his stories are actually about the voluntary and involuntary ways that people interact with each other within the structure of a society. The recent “Little Dorritt” miniseries was only the latest filmed evidence of this. The first one I encountered, though, after my smug high school days, was Douglas McGrath’s Nicholas Nickleby. The theatricality and lush cinematography of the film are there to remind us that, like all Dickens’ work, it’s just a story. But, like all Dickens’ work, it’s so much more.