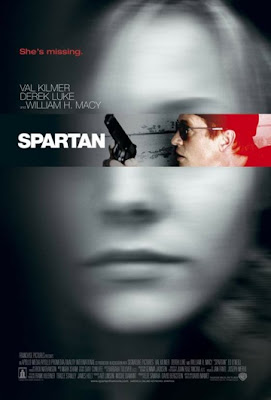 Spartan (2004)
In recent years, I’ve been very critical of writer-director David Mamet. Once a revolutionary playwright whose ability to write realistic dialogue was unmatched, Mamet quickly fell in love with is own linguistic tricks and dense plotting. After a while, his characters no longer sounded like real people; everything was too stylized. The recent addition of Redbelt to his filmography didn’t do him any favors with me, either. However, once we accept that Mamet’s style has changed- and he no longer has any interest in showing us real people in real situations- we allow ourselves to enjoy the work for what it is. Probably his most notable and exciting film since The Spanish Prisoner, Spartan tells the story of a lone government agent trying to find the truth behind the recent disappearance of the President’s daughter. At first, it seems simple, just the way the agent likes it. Then, in the usual Mametian style, the plot folds back on itself and we realize that what we accepted as truth was really just a manipulation. It is a film of political paranoia and suspicion made to look like a typical action/suspense story. It may not be on the same level of Glengarry Glen Ross, but it’s entertaining and stimulating.