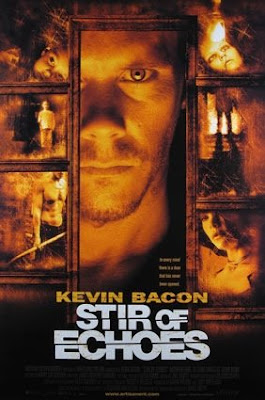 Every once in a while, two very similar movies will come out in the same year. Armageddon and Deep Impact. The Illusionist and The Prestige. Volcano and Dante’s Peak. Often, one will overshadow the other, which can be unfortunate. One sad instance is Stir of Echoes. A haunting movie about conversing with the dead, the film had just a bit too much in common with the enormously successful The Sixth Sense. By the time Stir of Echoes was released, the M. Night Shyamalan film was already setting box office records and, it seems, audiences had had their fill of supernatural thrillers. This saddened me, as I found Stir of Echoes to be an even darker exploration of obsession and the supernatural. Kevin Bacon stars as a blue collar husband and father in Chicago. One night, he allows himself to be hypnotized at a party, opening a psychic door in his head that allows him to see flashes of a horrible crime. As he scrambles to piece together the mystery, his behavior towards his family becomes erratic and uncaring. The film does such a good job of keeping us in the dark- giving us pieces to a puzzle without telling us how it’s supposed to look- that we feel a natural sympathy for Bacon’s character. We are just as eager as he to figure out what’s happening. Once the picture comes into focus, we are startled to discover not a story of purely supernatural terror, but of a horrible act of cruelty that takes place right here in our physical world. The combining of traditional suspense and supernatural horror makes for an unsettling genre piece that deserves to be remembered alongside such films as Rosemary’s Baby, The Others, and, yes, The Sixth Sense.