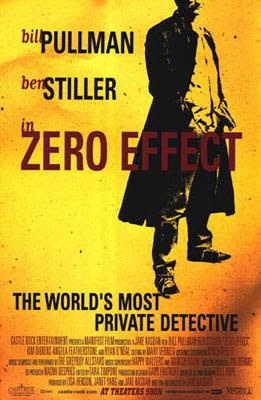 Sherlock Holmes and Dr. Watson; a brilliant detective and his loyal assistant. At this point, these archetypes have manifested themselves in everything from Nero Wolfe books to the television series “Monk.” One example, which came and went with all the fanfare of a ninja, was Jake Kasdan’s Zero Effect. The story of reclusive detective Daryl Zero and his legman owes a lot to the Holmes/Watson relationship. However, in this incarnation, Watson is less sycophantic and more frustrated. He has grown tired of dealing with his eccentric boss, even if he is a genius. Zero, ever the eccentric, doesn’t appear to really care what his assistant thinks. If he quits, there’s always more fish in the sea. However, as Zero’s most recent case develops, the two men learn that their bond runs deeper than they thought and that they, in fact, need each other. With a nice, subdued turn from Ben Stiller as the assistant and a career-best performance from Bill Pullman as the detective, Zero Effect showed that, if done right, even the most familiar of formulas can be vibrant and intriguing.