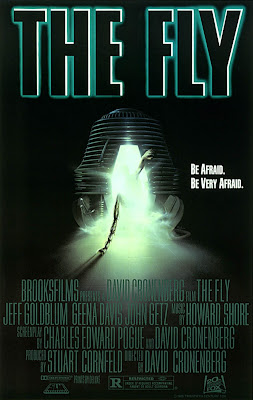 A man creates a device that teleports matter from one place to another. He uses himself as the first human test subject. Unbeknownst to him, a fly goes through the teleporter with him. The machine gets confused and genetically fuses the two together and the man slowly turns into a human-fly hybrid. A pretty ridiculous premise, as evidenced by its roots in 1950s sci fi. However, through the filter of filmmaker David Cronenberg, the story becomes not only expectedly grotesque and horrifying, but surprisingly heartbreaking. As the eccentric scientist, Jeff Goldblum delivers a performance that is both sad and frightening. The relationship between Goldblum and Geena Davis is similar to that of a couple dealing with terminal illness, trying their best to come to terms with the fact that one of them is changing beyond the point of recognition and will soon be gone forever. The Fly revolutionized movie makeup and special effects, filling the screen with disturbing and terrifying imagery, but somehow it’s the tragic story that sticks with us. That’s the brilliance of David Cronenberg: he can always deliver an engrossing character study, even in the midst of a disgusting gorefest.