Not For The Uninitiated, by Daniel Bergamini 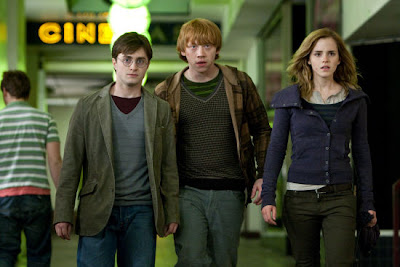 The first thing a critic must do before reviewing the new Harry Potter film, Harry Potter And The Deathly Hallows Part 1, is to come clean with his or her history with the series. This is important not only to avoid backlash from fans but also to give the reader the perspective from which the critic is coming. This is an issue, as the film is not only based on a hugely popular book series, but is also the first half of the finale of an eight film series. As this is the case, depending on your history with the series, your reaction will differ greatly.
As a kid, I watched up until the third film and decided the films along with the books weren’t for me. With the attention given to David Yates’ second last Harry Potter film, I decided to return to the series that I once given up on. Even with the rough beginnings of Chris Columbus’ first two films, the series caught my imagination. It was not so much what the first films accomplished but rather what it could accomplish. The first two films created a world which would later be fleshed out and be put to great use.
While Cuaron’s film, Prisoner of Azkaban, is certainly the best film, as well as the only film which really works as a stand-alone picture, it is David Yates’ later films which I have enjoyed the most. As the films progressively grew darker and emotionally mature, my investment grew, as well. Yates’ films are deeply flawed, however, my love for these characters has allowed me to ignore these flaws and enjoy the films.
Many have complained about the fact the final book has been split into two films, yet to someone who has fallen for the characters, this is a perfect situation. My problems with the previous films were that they always felt severely rushed, to a point where the character moments were often pushed to the side. With this film, however, the characters take center stage while the action is put to the side. That is not to say the film is without action; in fact, it has several brilliant action set pieces, but the focus is on the characters.
The film certainly has flaws, and I will get into those later. What is impressive about this film is just about everything. The acting has never been stronger, the cinematography is some of the most impressive of the year and David Yates’ direction is often masterful. The issue with the film for someone like me who watches the film for the characters and has not read the books is that you can be left almost completely in the dark. This film is not made for people unfamiliar with the series, or even people like me who love the films but haven’t read the books.
Even with this major flaw, I still found myself enjoying the film and not once feeling bored. I may be confused with what is really happening, yet the character moments and interactions are so strong I was always swept up in the film. Unlike Cuaron’s Potter film, I would not argue with anyone if they disliked this film, even if I enjoyed this one more. Yates fell into an awkward position with the last film, and instead of creating a fast paced finale, he created a slow paced character piece leading to the final half of the finale.
This is a film made strictly for the fans of the series, and why shouldn’t it be? It is the first half of the finale to an eight part film series that has spanned almost ten years. It doesn’t do everything perfect, but for the many strong emotional moments within, it is certainly worth a viewing. Keeping in mind the intended audience, one should be able to get past the flaws and enjoy the wonderful moments this film has to offer.