Playing with Fire, by Tyler Smith 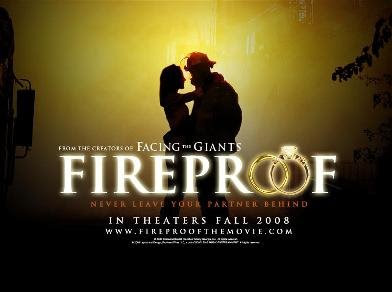 There have been a lot of jokes made about the upcoming Kirk Cameron film Fireproof. And, why not? The story of a shaky marriage made strong again through Christian principles is not going to be for everyone and, as is the case with most Christian films, the execution of this story will probably lack anything even close to subtlety. All in all, I’m pretty positive that the movie will be terrible.

That said, I’m strangely encouraged by the film’s existence. Awful though it probably is, it marks a significant step in the right direction for Christian film. With few exceptions, Christian filmmakers of the last twenty years have primarily been preoccupied with trying to emulate whatever is considered popular in secular entertainment. This resulted in The Omega Code, Time Changer, and the Left Behind series, among others. These are films that attempt to draw people in with a promise of special effects and thrilling setpieces. But, of course, these films don’t have nearly the budget that secular films do. So, of course, the special effects wind up merely laughable, leaving viewers dependent on the story and characters to hold their interest. Of course, those are bad, too. With the primary goal to get the Christian message out there, character complexity and conflict will be reduced to basic archetypes. Moral and intellectual gray areas may cloud the message, so they must be done away with.

Fireproof is different than these other films because it is not the Christian version of a Hollywood blockbuster. Rather, it is the Christian version of a kitchen sink drama. Rather than throw what little money they have into special effects that won’t look good anyway, the filmmakers are no longer trying to appeal to the broadest possible audience. Rather, they’re trying to appeal to adults. What teenage boy would want to see a movie about a troubled marriage?

If the Christian film industry continues this trend- making movies for a more mature audience- my hope is that they will eventually realize that they no longer have to make their message so frustratingly obvious. After all, adults have been around longer than teenagers and, thus, know how complicated life can be. They can pick up on subtle plot developments and character conflicts. As such, perhaps the Christian film industry will start producing higher quality movies, with nuance and meditation to temper the admittedly-heavy message.

Of course, perhaps none of this will happen. Perhaps the Christian film industry will just start making overwrought, hit-you-over-the-head-with-a-hammer melodrama instead of overwrought, hit-you-over-the-head science fiction. Nonetheless, Fireproof takes a small- but encouraging- step in the right direction. Who knows? Maybe in a few years, they’ll actually make a movie that a film lover can sit through.