Quiet. Too Quiet? by Kyle Anderson 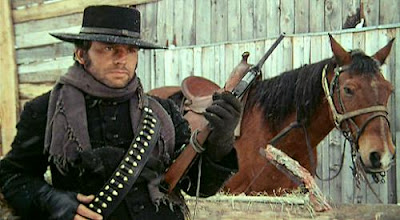 Spaghetti Westerns, meaning Western films made in Italy, were revolutionary not only in their filming styles and techniques, but also in their subject matter which was often darker and more violent than their American predecessors.  While Sergio Leone stayed quite close to the Hollywood mold, other Italian directors pushed the envelope much further.  They had to; after all, well over 400 such films were made in the 1960s and 1970s.  Something had to make them stand out in a crowd.  Leone is, without question, the most highly regarded Italian Western director, but a close second in my mind is a fellow Sergio, Sergio Corbucci.  His films were some of the most popular in their native Italy and have slowly gotten recognition worldwide.  His films tended to be even more cynical and less wholesome than your average Spaghetti and easily the highpoint of this comes in his 1968 masterpiece Il Grande Silenzio (aka The Great Silence).

From the outset, Il Grande Silenzio is a very different Western.  Most films in the genre take place in and around the Mexican territory, with portions of Almeria, Spain standing in for the American Southwest, this film opens on a snow-covered mountain, meant to be Utah in the winter, filmed in the Spanish Pyrenees.  In more ways than one, this is a cold film.  The characters are bundled up tightly as they trudge along quietly on horseback from town to town, echoing their inner apathy, the coldness they feel within.  The bad guys are very bad, and the good guys aren’t much better.
The Utah setting gives us historical precedence for the action that follows: a greedy land developer has hired a group of ruthless bounty hunters, lead by the sociopath Loco, played by German actor Klaus Kinski, himself a sociopath, to get rid of the Mormon settlers living in the mountains.  In order to adhere to the law, stating that murder is forbidden but self-defense is peachy keen; Loco coaxes his prey to draw on him, knowing he’s a far faster pull, and shoots them first.  All kosher.  As far as screen villains, Kinski’s Loco is one of the most frightening, playing him as a professional who is gleeful when he gets to murder folks.  Loco and crew collect their reward every time, and nothing can stop them because it’s all completely legal.
That is, until they murder the wrong man.  At the beginning of the film, Loco guns down the husband of Pauline, played by Vonetta McGee.  She decides to find a bounty hunter of her own.  She finds a mute gunslinger, known as Silence, who has garnered quite a reputation for killing bounty hunters.  A flashback shows that Silence’s family was killed when he was a small child by a gang of bounty hunters, conveniently hired by the same greedy land developer, and in the raid on their farmhouse, his throat was cut, severing his vocal chords.  Humorously character was not originally supposed to be mute at all.  French actor Jean-Louis Trintignant was a friend of Corbucci’s and agreed to be in the film on the condition that he didn’t have to learn any lines.  It was this minor squabble between friends that lead to one of the most interesting lead characters in the entire Italian Western cycle and, indeed, lent the film its title.
In his first scene, Silence is depicted killing a group of bounty hunters in a manner not dissimilar from the way Loco had killed the Mormons.  Both men are ruthless and show no remorse.  They’ve even got the same penchant for the law as Silence also waits until his opponent goes for his pistol before shooting.  This leads to some interesting confrontations between the two men as they both try to goad each other intro drawing first.  Spaghetti Westerns are known primarily for their high body count and this one is no exception, but it is interesting to see not one but two characters who stay their hands out of principle before mercilessly killing people.
Eventually, the developer Pollicut and his assistant Martin, played by Spaghetti Western staples Luigi Pistilli and Mario Brega, put bounties on the heads of everyone in the small village of Snowhill and it becomes clear that Silence will have to forego his ways in order to save the innocent people, and avenge his family.  A great number of Westerns have the same or similar plotlines and we all know how it is supposed to end, except this one doesn’t.  Corbucci and his writing team make the ending of Il Grande Silenzio one of the bleakest in the genre’s history.  The title, it seems, is indicative of three things: the character of Silence, the sparse backdrop of the snowy mountains, and the reaction the audience has after seeing it.
While Sergio Corbucci was known for rip-roaring Western adventures, such as 1970’s Compañeros, and his most famous film, 1966’s Django, it’s Il Grande Silenzio which is the director at his most artful and daring.  This is a film that pushes the genre to new levels and creates a story unlike anything people were used to, yet likely more historically accurate.  If you’re looking for a good time on a Saturday night, I’d say this movie is not what you want, but if you’re looking for a dark, violent, thoughtful, and well-made film, look no further.