The Beguiled: Sad and Lonely, by Tyler Smith 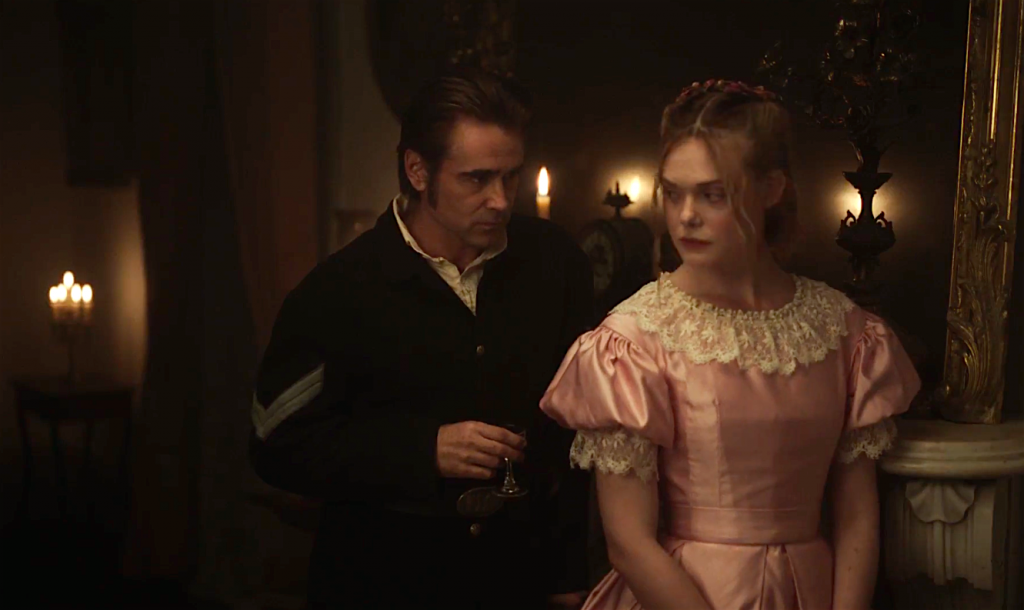 It is remarkably difficult to write about Sofia Coppola’s superb Southern Gothic film The Beguiled. How exactly does one lead off with a film like this? To talk about any particular element first is to suggest that this element is somehow more important than the others. But part of the brilliance of this film is how perfectly all of its elements fold together, feeding into each other, until the film is a seamless melding of narrative elegance, visual beauty, and thematic complexity. It is a deeply engaging film, and one that lingers in my mind like a morning fog.

I suppose I’ll start with the story, because we have to start somewhere. In Civil War-era Virginia, a secluded girls’ school continues to operate, acting as though the near-constant sound of cannon fire off in the distance is not at all bewildering. Led by the prim Martha Farnsworth (Nicole Kidman), assisted by the quietly-sad Edwina Dabney (Kirsten Dunst), the school is home to only a handful of girls, most notably Alicia (Elle Fanning), the oldest and most listless of the bunch. Soon into the film, a wounded Union soldier named John McBurney (Colin Farrell) is found by one of the students and brought to the school to heal. As he recovers, McBurney begins to bond with the women, each of them projecting upon him what they appear to lack. Both Martha and Edwina are incredibly lonely and find in McBurney a sympathetic ear. Alicia is barely able to restrain her excitement at this charming new addition to the school, who will undoubtedly be able cure her boredom. McBurney is more than happy to be whatever these women need him to be, as long as it means he can avoid the war a little longer.

Just looking at this story, it would be easy to feel that McBurney is some kind of scoundrel, manipulating these poor, lonely women to get what he wants. And, certainly, there is a knowing flicker behind his eyes that suggests, even as he says the most loving things, that he is only out for himself. That would be a bit too simplistic, though, as each of the women use McBurney’s affections to gain the upper hand in a household that is growing steadily more competitive with each passing day. Everybody is using one another, and it’s debatable to what degree they actually know it.

What I found particularly striking were the gender dynamics of the film. In the midst of all of this manipulation and suspicion, an act of (possibly) accidental violence occurs, and each character has a theory as to why. I was reminded of David Mamet’s Oleanna, in which a man and a woman engage in a number of verbal sparring sessions, leading to a number of misunderstandings, questionable motives, and – somehow inevitably – an act of violence. It’s hard to know where to stand, and it’s possible that two people could have completely different interpretations of the guilt or innocence of the characters.

The Beguiled is similar, in that nobody seems particularly innocent. Even the younger girls skulk around the hallways, trying to curry favor; with McBurney, with Edwina, with anybody that can help them. Underneath it all is a restlessness, and deeper still, a prolonged sadness. Even McBurney, who appears fairly confident in himself, seems at times to carry the weight of the world on his shoulders. He has seen battle and it has certainly had a profound effect on him. None of these women – nor the audience – know what he has been through, but might nonetheless judge his desire to never go back.

There is this swirling, ever-changing dynamic between the older women and the younger women, and McBurney’s relationship with all of them. And throughout it all, the characters seem to question their own motives, not having a secure hold on exactly why they’ve done some of the things they’ve done, even if it seems apparent to those around them. It creates a decidedly unstable quality to every scene, every conversation, and perhaps even every line.

To maintain this tone requires each actor to be so in tune with their character – and each other’s characters – that even the slightest flash of awareness from the performers would break the carefully-crafted spell. Thankfully, each actor seems to instinctively understand what is expected of them. Nicole Kidman might have the hardest job of them all, as she is required to be a natural leader, with an assumed air of authority, while also hinting ever so slightly at the fragility underneath. Kirsten Dunst, who so often plays bubbly, enthusiastic characters, here struggles to contain her sadness and loneliness. Edwina has not yet learned, as the headmistress has, how exactly to contain her emotions; that she is steadily learning, however, makes the character that much more heartbreaking. In her performance, Elle Fanning must play that most teenage of emotional beats: the intense desire to appear older and more worldly than she is. This is sad in its own right, but also creates a great deal of frustration with the girl. Fanning, so brilliant in last year’s The Neon Demon, here again shows a noted lack of self consciousness that is refreshing to see.

And, of course, there is Colin Farrell, who seems to understand exactly what McBurney is to these women. He is handsome, rugged, and mysterious. McBurney is, in fact, a sort of movie star, sending the younger girls into fits of giggling that would make a modern teen idol proud. Farrell, who was able to shed his natural charisma so effectively in The Lobster, lays it on thick here, fully embracing his natural Irish brogue and sheepish smile. It is often a performance right out of a harlequin romance novel, which is a choice that both Farrell and McBurney are making. From the moment the character wakes up, he understands that he is going to need to perform in order to gain the trust of these women, so he smolders and smirks, flirting with whomever is in front of him. McBurney might actually have the feelings for these women that he professes to, but they are secondary to his primary desire to never return to the hellish nightmare of battle; a desire that, frankly, is quite understandable.

Photographing these perfectly-modulated performances is Philippe Le Sourd, cinematographer of The Grandmaster and, perhaps most appropriately, Ridley Scott’s A Good Year. His ability to shoot through the thick foliage, always capturing the sunlight in just the right way, creates a visual landscape that is both beautiful and melancholy. The deliberate stillness of his shots are like something out of a slow burn horror movie, and actually helps to inform the way we feel about this world. This large, sparsely-populated mansion full of sad and lonely women is about as close to a haunted house as a drama can get, and Le Sourd frames it in a way that is both inviting and ominous. I look at the peaceful exterior, with its sun-dappled trees and overgrown pathways, and I wish I could step into the frame. But, of course, to do so would mean entering a world of quiet desperation and thinly-veiled suspicion; the film is so breathtakingly beautiful that it might actually be worth it.

Sofia Coppola has been exploring female estrangement since her debut film The Virgin Suicides, carrying it through to Lost in Translation. With Marie Antoinette, Somewhere, and The Bling Ring, she explored the loneliness to be found in the midst of opulence and privilege. In The Beguiled, she brings all of these together, using fascinating source material to not merely tell a story of sadness, jealousy, and manipulation, but to invite us into that emotional state of being. It may not be my favorite of her films, but I think it is her most accomplished, and it will stay with me for a very long time.