The Grass is Always Greener, by Tyler Smith 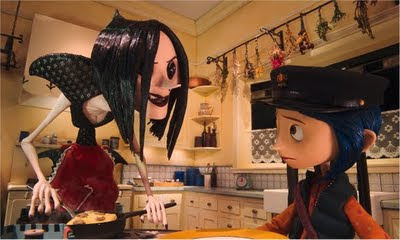 When I was growing up, I had a small collection of VHS tapes. On these tapes were various Disney movies, such as Robin Hood, Peter Pan, and the Sword in the Stone. My parents had no qualms about letting me watch these movies, though many of them, I’ve come to realize, are deeply disturbing. From the pink elephants in Dumbo to the Cheshire Cat in Alice in Wonderland to the fate of Lampwick in Pinocchio, many of these films had images that seem as though they would be too intense for children.

And yet we watched them anyway. Because maybe it’s okay for children to be a little frightened on their way to learning a lesson. It’s with this in mind that I write my review of Henry Selick’s Coraline. The story is very basic. A young girl, feeling neglected by her parents, entertains herself by exploring the nooks and crannies of her new house. As she does, she finds a small door leading to a parallel world.

This other world looks exactly like our own, but a little better. Her parents are attentive and loving, the neighbors are welcoming, and the animals talk (some even put on a show). The one creepy element in this world is that all the other humans have black buttons where their eyes should be. No matter. What these people lack in aesthetic beauty, they more than make up for in positivity and love. Coraline has a hard time pulling herself away from this wonderful fantasy. Why would she ever want to go back home? Nobody pays attention to her. Do they even notice she’s gone?
As Coraline goes back and forth between worlds, she discovers that everything is not what it seems in the other world. The more truth she reveals, the uglier the world becomes. Soon, she finds that it was all a lie, created by the Other Mother to ensnare listless children.
The parallel world and its inhabitants begin to turn into grotesque caricatures of humanity. In some cases, the inhabitants disappear altogether. In one particularly unnerving scene, Coraline finds herself speaking to an empty suit that walks and talks. Many of these scenes seem as though they might be too intense for children, seemingly its intended audience. But, then, boys turning into donkeys is pretty frightening, too, but that didn’t stop multiple generations of children from watching Pinocchio.
Perhaps it is necessary for these scenes to be so unsettling. It really drives the point home. Coraline, faced with a drab and boring reality, chose to try to escape it, embracing something that seemed too good to be true. But, when faced with the horrifying alternative, she realizes just how much she truly cherishes her parents and her friends and her neighbors. Over the course of the film, Coraline discovers that, while running from one’s problems might seem like the easiest thing to do, it might simply land one in a different- sometimes worse- set of circumstances. Perhaps it is better to simply stick it out and deal with one’s problems, insurmountable though they may seem.
This is a very adult concept: accepting personal responsibility for bettering one’s own situation. However, for children, it might be a bit too subtle. The solution? Throw in a talking cat, and a terrifying spider-like villain, and creepy mechanized henchmen. These fantastical elements keep kids deeply involved in the story, much in the tradition of the old Grimm’s fairy tales.
The animation, art direction, and voicework in Coraline makes for a fun, memorable movie watching experience. But, unlike many other children’s movies, it has a lesson to teach. It’s a lesson that kids can really benefit from. Probably some adults, too.