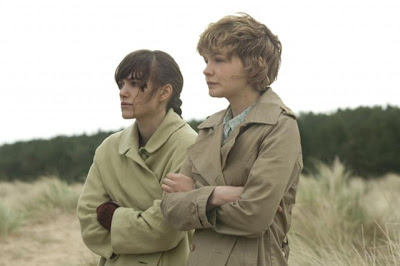 The first viewing of Mark Romanek’s Never Let Me Go left me in my seat, emotionally wrecked. It was a truly unique movie-going experience — as it is so rare for a film to have that sort of effect on me. While emotionally difficult, the film still left me with a certain joy as I knew I had just seen something brilliant and beautiful. It was this joy that prompted me to see the film once more and it was during this second viewing of Never Let Me Go that I realized how truly special a film it it.
The film, written by Alex Garland and based on the book by Kazuo Ishiguro of the same name, is part coming-of-age, sci-fi and period piece all wrapped into one. And while a film that mixes genres as Never Let Me Go does can often feel like a mess, Romanek manages to create a subtle devastating drama that never calls attention to itself. The subtle touch that sophomore director Romanek brings to the table is what makes the film work, it is also what will likely lead to a lack of attention come Oscar season.
Upon release, the film did not reach the audience it deserved.  It merely appeared and went away without much notice from mainstream audiences. This is a shame, yet, with the Oscar attention the film deserves, it could certainly have a new life on home video. Unfortunately, the film does not seem to have any chance this season. That being said, Never Let Me Go has many of the aspects that usually garner Academy attention.
Had this film been released next year, it may have had a completely different release schedule as one of its leads, Andrew Garfield would have already become a huge star as the new Spider-man. It is not only Garfield that should have attracted more attention to this film, as the rest of the cast is filled with young rising stars, from Keira Knightly to Carey Mulligan. Each of these stars give incredibly mature performances. They are not showy or over-the-top.  The actors do exactly what is needed from them, without ever going too far.
The subtle touch and understanding of cinema that Mark Romanek shows as a director is truly incredible, as this is only his second film. With his first film, One Hour Photo, we saw a director who had yet to found his footing. With Never Let Me Go, we see Romanek completely mature as a filmmaker. With a beautiful score and gorgeous cinematography, almost every aspect of the film could be nominated for an Oscar. However, all these aspects combine into a very subtle piece of filmmaking, which, while emotionally devastating, is still never obvious.
The story this film tells is one of friendship, love and the acceptance of death. It is also a story that is told in such a mature, understated way that any Oscar attention seems utterly unlikely. Romanek has crafted one of the most impressive features of the year, one that continues to haunt for weeks after.