Who Is a Film For? by David Bax 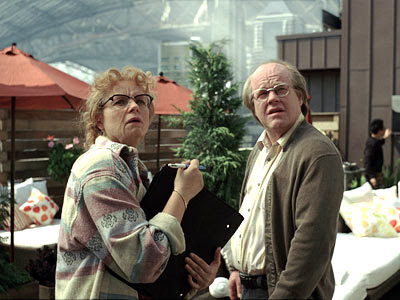 I’ve often said that an artist has no responsibility to his or her audience, only to him or herself. I had that theory tested recently. My reasoning has always been that a movie (or whatever) made only for the audience contains no truth, only pandering. In other words, you end up with a Roland Emmerich film. But in the other extreme, a movie made only for the satisfaction of the filmmaker probably doesn’t contain much truth either, or at least not the kind that you and me care about. All this went through my head as I slogged through Charlie Kaufman’s Synecdoche, New York and wondered, “Who is this for?”

It has long been my opinion that art exists to shed new light on truth. In a way, it should be relatable but still surprising. Kaufman’s film may surprise you from time to time in the bizarre ways its idiosyncratic internal logic develops onscreen, but it is in no way relatable. It is not an allegory or a symbol for the ways we all live our lives. It is not even, as it perhaps seems to be, about the way creative people see the world. It is, like Adaptation before it, a film about Charlie Kaufman and the narcissistic forms his feelings of inadequacy take.

When the term “personal film” is used, it is almost always a complement and it should remain so. To get a unique take on a small corner of the world that we all live in is one of the great possibilities and sweetest pleasure of watching films. Synecdoche, New York seems to have been made by someone who inhabits a different world entirely. We know, of course, from films such as Being John Malkovich, Eternal Sunshine of the Spotless Mind, even Confessions of a Dangerous Mind, that Kaufman is fully capable of tapping into humanity’s brain and present it to us in delightfully unexpected ways. I guess when the subject matter gets too close to home, he loses his perspective.

Or perhaps the problem is me. If I can suggest that Charlie Kaufman lives in a different reality than the rest of us, isn’t it possible that the film’s failure to speak to me is a result of my detachment and not his? I may have hated it but, in the end, Synedoche, New York is a technically well-crafted film. My response to it was purely emotional. For that reason, I can’t dismiss it completely and I won’t attempt to discourage anyone from seeing it. In fact, I’m glad it exists?