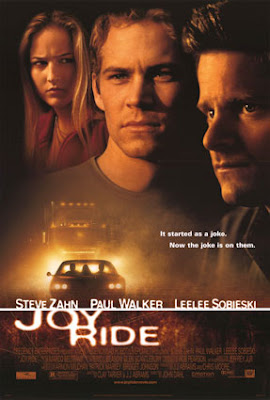 Before Jigsaw embarked on his lethal brand of moralising, there was a trucker named Rusty Nail. Paul Walker and Steve Zahn play a pair of brothers whose relationship has been fairly nonexistent for the last few years. They reunite and head east in a beat-up jalopy, bored out of their minds and looking break up the tedium. They install a CB radio and pull a prank on a lonely truckdriver. When their antics land a man in the hospital, they are given an extended, cross-country civics lesson by the angry trucker. Director John Dahl manages to take a fairly familiar concept and crank up the tension, making an undeniably-Hollywood situation unbearably, excrutiatingly real. With a solid script and terrific performances (particularly Zahn as the black sheep of the family), Joy Ride deserves to be listed as one of the most effectively suspenseful movies of the last decade.