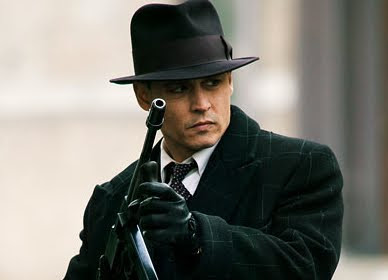 As is the case with most Michael Mann films, Public Enemies  is a brilliant technical achievement. From the authentic art direction to the crisp editing to the energizing digital cinematography, this film has all the technical elements required in a memorable film.

It’s a shame that I didn’t care about the characters at all.

Public Enemies is about John Dillinger, the legendary bank robber whose exploits made him a would-be folk hero across the country. The story of Dillinger- and the lawman that pursues him- seems like it would be great material for Michael Mann, who revolutionized modern crime movies with his exceptional Heat. Certainly a technical master, Mann has been a favorite of mine for years; not just for his directorial flourishes, but for his ability to relate interesting stories about fascinating people. Watching him delve into what made Dillinger tick could have been a deeply satisfying cinematic experience.

Unfortunately, however, Mann has allowed himself to get so mired in the minute details of the period and the intricacies of the events that he forgot to make Dillinger relatable. The character certainly doesn’t have to be sympathetic, nor does he need to be an open book. As a film watcher, I like having to figure some things out for myself. However, in order to do that, I need to be given some information. Just give me the slightest hint of character motivation and I’ll be happy to take it from there.

Such things are not to be found in Public Enemies, however, as I left the theater feeling no closer to knowing who John Dillinger was than when I entered. The same goes for Melvin Purvis, the federal agent tasked with catching Dillinger. His motivations remain as elusive as those of his quarry. We sometimes feel that Purvis is conflicted about the measures to which he must go in order to gain the upper hand, but we don’t know why. Does he not have the stomach for it? Does he secretly admire Dillinger? We just don’t know.

The story of Dillinger and Purvis has been related before, most notably in John Milius’ 1973 film Dillinger. In that version, we got a strong sense of who this man was. Played with gusto by Warren Oates, Dillinger seemed like a living, breathing person, not the shadowy legend embodied by Johnny Depp. Oates’ Dillinger is not remarkably likable; he is more of a charismatic brute. But at least he has a pulse.

I don’t know why Mann was apparently reluctant to dig deeper into his subject. He is clearly committed to preserving the authenticity of the period and events; perhaps he felt strongly about not overly fictionalizing an already larger-than-life historical figure. Whatever his reasoning, Mann’s hard work at bringing Dillinger’s world to life ultimately amounts to nothing. What does it matter how amazing this created world is if we don’t care about the people inhabiting it?

There are a couple of characters that stand out. Marion Cotillard transcends the fairly thankless role of Billie Frechette. In films like this, there is almost always a woman whose job it is to worry about the protagonist. Here, Cotillard imbues Frechette with credible vulnerability, helping us to believe that this woman still exists when Dillinger isn’t around. Billy Crudup is also memorable as J. Edgar Hoover, who capitalizes on the crime wave to snatch more power for himself. Played as an unshakable optimist, whose smile doesn’t even fade when being berated by his superiors. Lastly, Stephen Graham creates a truly loathsome Baby Face Nelson. His recklessness and indifference to human life does more to define our protagonist by contrast than anything Dillinger does directly.

For me, the most notable directorial choice is in regards to the violence. Michael Mann has never glorified violence. In his career, Mann has done everything he can to emphasize the fragility of the human body and the inherent brutality and heartlessness of violence. He takes no joy in depicting these scenes, and we take no joy in watching them. We cringe when innocent people are hurt, as one would expect. What’s interesting is how heartbreaking it is to watch Dillinger’s men go down. Dangerous though they may be, when they’ve been shot several times and are slowly bleeding out, their sad acceptance of their fate reminds us that these men are human beings, too. The graphic depiction of Dillinger’s assassination may seem excessive to some, but I view as wholly necessary.

It is unfortunate that only in death do we feel something for these characters. Perhaps if Mann had put as much humanity and care into depicting these people’s lives as he did their deaths, Public Enemies could have been one of the best films of the year and a worthy addition to the gangster genre. As it is, it feels like little more than a missed opportunity. A prime example of style over substance.