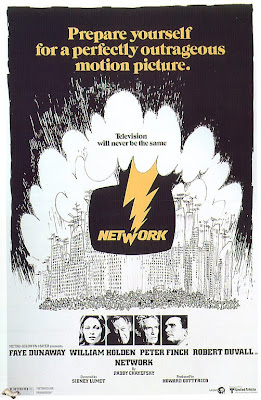 directed by Sidney Lumet
Paddy Chayefsky doesn’t so much write as he carves onto tablets. His hyper-literate, bludgeoning satire of sensationalized news-as-business has been muted over time only by its remarkable prescience. The monstrous scenario of an insane news anchor becoming the all-time ratings grabber after threatening suicide on-air, matches in spirit that which has become expected in the age of reality tv. The film is really two halves: a rich, if broad, indictment of those who fashion news as a vehicle for ratings and money; and a dive-bombing expose of the damage selfishness can wreck upon a marriage. The two halves are brought together by the overwhelmingly high level of performance from every actor involved, aided by the pitch-perfect direction of Sidney Lumet, who never allows the theme, the dialogue, and the performances to cancel each other out. Oscar wins for Peter Finch, Faye Dunaway, Beatrice Straight, and Paddy Chayefsky.