Okay, here’s the deal.  It’s late and I’m super busy with my new job.  But I haven’t done one of these in a while so we’re gonna do this and we’re gonna make it fucking quick.  Everybody buckle up.

Electra Glide in Blue
Part of LACMA’s road movies series, Electra Glide in Blue is a not too great movie that I am nonetheless very glad exists.  It’s the only film every directed by James William Guercio, who found much more success as a music producer, working with, among many others, the band Chicago, whose lead singer, Peter Cetera, makes a small cameo as a notorious, criminal, motorcycle hippie.

That description right there is exactly why this movie comes anywhere near redeeming itself after its hackneyed and forced post-Easy Rider, post-method acting sturm und drang.  The idea that a member of Chicago, not exactly the most status quo-threatening band in rock music’s history, would portray a figure of violent and seedy rebellion is part of the film’s occasional gonzo sense of fun.

Sadly, after an episodic first act, in which Robert Blake gives one of the most natural and charismatic performances of his career while Guercio’s camera fetishistically lingers on his tighty-whity clad buttocks, his black leather highway cop uniform and the gleaming two-wheeled vehicle between his legs, Electra Glide in Blue goes and ruins the weird, fascist, homoerotic party by having a plot.  From that point on, all fun is lost. 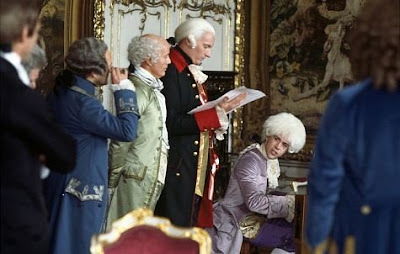 Amadeus
You know how sometimes a person, while trying to convince you to see a movie will hesitate and say, “I don’t wanna oversell it”?  Well, I’ve been hearing for years how great Milos Forman’s Amadeus is.  I’ve actually met more than one person who counted it as his favorite film.  But no matter how long and how enthusiastically it was sold to me, nothing could have prepared me for how fantastic this movie is.
Forman tells a story about one of the greatest and most influential composers in human history without even a dash of self-seriousness, showing a great skill for resisting temptation in the process.  Often flatly lit as if to highlight the ordinariness of the baroque production design in these characters’ lives, the film is, on the surface, completely unconcerned with its subject’s place in history.  It emphasizes that these people – like those in Forman’s earlier, Czech films – are simply human.  They are petty and carnal.  Questions about God and destiny are not, for them, bound in literary ornamentation but are every day concerns.  The death of Mozart in this story is not the beginning of his legend but the end of his possibilities. 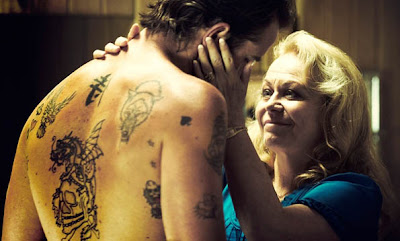 Animal Kingdom
Films, when they’re doing their job, bring you into the world of their inhabitants and, in a relatively very short period of time, make you understand everything you can about a person or a group of people who are often nothing like you.
The protagonist of David Michod’s Animal Kingdom is a young man who affects almost nothing in the world around him. He gets caught up in the violent, criminal lives of his uncles because he never once gives any thought to resisting it.  He probably speaks fewer lines than any other character in the movie and, in real life, would be a person we would be initially frustrated by before giving up on him altogether.

I won’t spoil the film, as it’s so recent and so deserves to be seen, but it’s the final moments that make the whole thing so impactful.  Is this a tragic story or a triumphant one?  It depends on whether you’re looking at it as an outsider, with the privilege of perspective, or from our hero’s point of view.  Perhaps Animal Kingdom is tragic because it takes place in a world so bereft of opportunities that this is what it defines as triumph.

A night of experimental films
I only attended the final installation of Los Angeles Filmforum and the Echo Park Film Center’s presentation of Bay Area experimental films from 1945-2000, curated and presented by Steve Anker, one of the editors of a new book on the subject, Radical Light.  The focus this week was on “small gauge” films, those shot in either 8mm or Super 8, and they were largely presented without sound.

I’ll admit that I don’t have quite enough working knowledge of the world of non-narrative film to comment with any authority on what I saw.  But I want to take the opportunity to suggest that more film buffs seek out these types of screenings.  Not only are they breathtaking achievements but it would be educational to remind ourselves from time to time that the camera and what’s in front of it are integral parts of the stories we watch day to day.

Particularly recommended are Bruce Conner’s Cosmic Ray 1, a hyperkinetic five minutes of movement, flash and naked women dancing; Scott Stark’s Acceleration, which manages to be assaulting and haunting simultaneously; and Ellen Gaine’s Fragment, a beautiful and hallucinogenic image-based interpretation of the notion that, if you repeat a word often enough, it will become nonsensical.