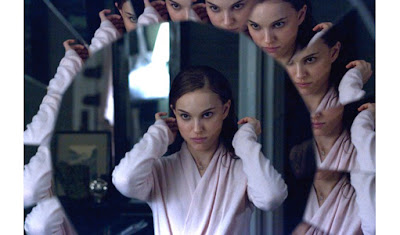 It is difficult to take a critical look at Darren Aronofsky’s Black Swan. This is not due to its quality, but rather due to what it is attempting. The film is melodramatic, obvious and even slightly ridiculous. It is also beautiful, masterfully directed and nearly perfect. Aronofsky is not a subtle director.  This is not a flaw; it is a choice. His films are about limits, both in terms of character, but also in terms of filmmaking. His work will often push both his characters as well as his audience to their limits. Black Swan is one of those films, and with lack of a better term, I will have to use the cliched but appropriate phrase, it is pure cinema.
Black Swan tells the story of the aging ballerina Nina, played by Natalie Portman, as she prepares for her first starring role in Swan Lake. To get into more detail about the story of the film would be pointless as the story is very simple, allowing the emotions and imagery to be the main focus. The story mirrors very loosely the ballet, Swan Lake, in which Nina stars. This device, as well as elements of the plot, borrows heavily from the classic ballet film The Red Shoes, in which a ballerina cracks under immense pressure.
Many feel that Aronofsky failed with his third film, The Fountain, as he attempted something on too grand a scale. He seems to have taken this to heart in his next film, The Wrestler, where he pulled back, creating a gritty, realistic character study. Featuring the realistic aesthetics of The Wrestler and the exaggerated emotions and filmmaking of The Fountain, Black Swan appears to be a combination of the two films’ separate sensibilities. This marriage may seem awkward, but it is an absolutely perfect match for this specific story.
As Nina begins to lose her grip on reality- due to the pressure put on her by both her overbearing mother and her coach- the filmmaking begins to intensify. It takes its cues from the emotional traits of a ballet in which everything is exaggerated. People often call the film obvious and melodramatic.  To me, this isn’t a bad thing. Not every film must be subtle and this film basks in melodramatic qualities. Aronofsky has always been considered a great filmmaker and, with Black Swan, he proves himself a true auteur.
Nearly every creative decision behind the technical aspects are noteworthy, from the outstanding score by Clint Mansell to the cinematography. The film, shot by Aronofsky’s long time collaborator Matthew Libatique, is both gritty and stunning. Libatique and Aronofsky use several simple tricks to incredible effect, such as shooting on Super 16mm and an almost constant use of handheld. Just simple decisions like these do so much to pull the audience into the film, making it seem all the more real. This realism makes the scenes when Nina begins to lose her grip with reality all the more disturbing.
Of course, the technical aspects would be nothing without a captivating leading performance, and Portman delivers just that. She is both utterly innocent and, at the same time. It feels as if she could strike out at any moment. It is a transformation from the virginal white swan to the dangerous, tempting black swan that appears both in the film’s reality as well as in the ballet.
Similar to Stanley Kubrick’s The Shining, Black Swan is a horror film which moves past the genre’s familiarity and delivers something truly fresh and challenging. Aronofsky was not attempting to say anything of importance with this film, instead, he perfectly crafted a disturbing, challenging and unique horror film.