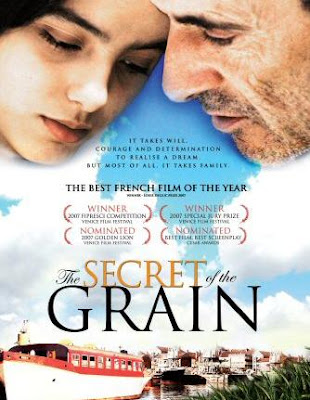 Those of you who listen to the show know that Tyler and I are planning to run down our favorite films of the year on the next episode. It’s this time of year when my desire to celebrate great films clashing with my obsessive-compulsive tendencies, with the OCD usually prevailing.

You see, the other day, I saw a film called The Secret of the Grain. I’ll say right now that it was great. It approaches a clan of Mediterranean immigrants living in France with such an intuitive feel for the rhythms and hiccups of familial interaction, that they are immediately relatable, while maintaining the foreignness that is a necessary part of their identity.

Certainly, a film this moving and sure-handedly executed has got to be in the top ten. But of what year? The Secret of the Grain was released in its home country of France at the end of 2007, after having spent a few months on the festival circuit. It took more than a year for it to get to the United States, with a very limited run just a few days before the end of 2008. It didn’t get anywhere near me, tucked away as I am in the quiet hamlet of Los Angeles, until the calendar had turned to 2009.

So this is where the battle begins. Which of the three years gets this marvelous film placed in its top ten? It’s too early in 2009 to really consider it. Hell, its magic may have faded by the time I’m compiling my list again this time next year. 2008 would, of course, be the practical choice, as the film is fresh in my mind and the timing is so convenient to the reveal of my list. But, at the end of the day, the film was completed and released in 2007. It is of that year.

I keep my lists – not just the top ten but every film I’ve seen from a certain year – with the intention of looking back on them, having them stand as a chronicle of what was happening in the world of film at that time. With posterity in mind, I have to place a film on the list where it belongs.

So, when I discuss my top ten films of 2008 on the podcast in a few days, you won’t be hearing me name The Secret of the Grain. This is a film from 2007 that happens to be one of the best films I’ve seen in the theater in the past twelve months. I will tip my hat to it now and remember it well for years to come but I won’t break my rules just so I can mention it on the podcast. That’s what this blog is for.