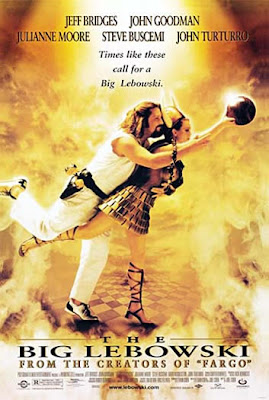 directed by Joel and Ethan Coen
It’s a Film-Noir, but it’s like a Comedy. No, wait. It’s kind of a Stoner Movie, but with nihilists and a vaguely Western-sensibility. Hmm…No… here we go. It’s a comedy buddy-picture about bowling that devolves into violence and death, but not before a drug-induced dream sequence at a porn producer’s mansion. Well, that’s just going to have to do. One of the biggest charms about The Coen Brothers’ The Big Lebowski is that it seems to resist any such categorizing. It’s hilarious. It’s weird. Jeff Bridges and John Goodman have the best of all possible conversations. There’s a marmot in a bath-tub and Sam Elliott narrates. And so, after laughing your ass off at all this and more, don’t try to figure it out. Just remember, at the end of the day, when your head’s on the pillow and you’re falling asleep, and the days of yore are on the back of your eyes: the Dude abides.