Let Me In, by Daniel Bergamini 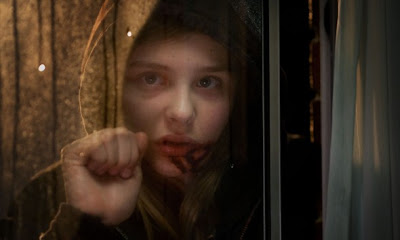 It is quite apparent why news of a remake going into production is often met with resentment from the film community. It usually means the re-imagining of a beloved property simply for profit.

A recent trend in Hollywood has been the re-making of any foreign film that is mildly successful in America. While Tomas Alfredson’s Let The Right One In may not have garnered much mainstream attention, it did make quite a splash in the film community. Naturally, talk of remaking this vampire tale sprung up quickly. Like clockwork, the fans of the original threw up their arms in protest.
But if  the negative reactions to the news seemed warranted at first, word that legendary horror production company Hammer was spearheading the project and news of the increasingly impressive cast and crew helped change  a lot of minds.
Matt Reeves’ part remake-part adaptation Let Me In is a rare remake that not only justifies its existence but also improves on the original. That being said, it also begs the question, can a remake truly be better than its original, especially one that stays so close to its predecessor.
The story, which at first glance is a vampire tale, is really about being a kid and the problems that come with it. The film focuses  on Owen, played by The Road‘s Kody Smit-McPhee, as he deals with loneliness, bullying and an emerging prepubescent love. The scenes of bullying are some of the more shocking moments in the film, as they feel real. This is not an 80’s teen comedy with the bully using his karate skills, this is what bullying is actually like, and it is hard to watch.
Rising star Chloe Moretz plays Abby, once again proving she is one of the best working child actors.  Abby is a young vampire who moves into Owen’s apartment building with her guardian, played by Richard Jenkins. It is the relationships between Abby and her guardian that lead to some of the most interesting, and emotionally satisfying material of the film. Jenkin’s performance adds a level of sadness to the character that is not only absent in the original but makes his horrific acts, in some ways, understandable.
While separately these characters’ lives are filled with sadness and anger, when together, Abby and Owen can finally be children. It is strange to see a love story about children so young, yet it rings true, more so than most love stories in film. This can be credited to the great performances by these young actors.
Almost every choice that Reeves’ made to either add to the original story or take away from it was for the better. He replaced the distracting drunk friends from the original and added a police officer, played by the great Canadian actor Elias Koteas. While he did not innovate the now famous pool sequence from the original, he did add a fantastic sequence involving the guardian in a car. It is a scene that will remain in the viewers’ mind just like the original’s pool sequence did so effectively.
Reeves’ ability to make such a unrealistic situation so relatable shows his ability as a filmmaker. Similar to Spike Jonze’s Where the Wild Thing Are and Spielberg’s E.T. this is a rare film that gets what being a kid is all about, and at times it can make this film hard to watch.
Matt Reeves’ Let Me In is a hard film to judge, while it improves on the original it also, at times, feels like a shot-for-shot remake.