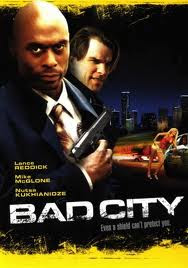 BAD CITY (2006)
aka DIRTY WORK
Just take a look at the above image.  If you saw this DVD on the shelf at the local video store (or, I guess, at a Redbox terminal), you’d pass it by.  Surely, this is just some cheap would-be cop thriller.  Admittedly, Bad City is pretty low budget.  And the story isn’t anything you haven’t seen before.  However, the film is recommendable based on the superb acting by some key members of the cast.  Key among them is character actor Austin Pendleton as an edgy crime boss.  Pendleton has a decidedly nebbish look to him, but he manages to turn the crime boss character into somebody that is not outwardly frightening, but we still know instinctively to fear him.  Like some kind of feral dog, the man inspires us to keep our distance, lest he lash out violently in all directions.  That, combined with the restrained, conflicted performance of Lance Reddick as an exhausted cop, makes Bad City an easily-dismissed film that deserves a second look.